The Spooktacular New Adventures of Casper

Make a friend and stop moving around in the country
To restore Casper back to life (succeeded, briefly)

Her father's idea of her mother being a ghost, the Ghostly Trio bullying Casper, having no friends, moving around, Amber Whitmire

Dances with her father and Casper to the theme song "Casper the Friendly Ghost"
Kathleen "Kat" Harvey is the deuteragonist in the 1995 film Casper. She is Casper's best friend and love interest. She also appears in the sequel/spin-off animated series, The Spooktacular New Adventures of Casper.

She is portrayed by actress Christina Ricci, who also played Wednesday Addams in the first two Addams Family movies.

Kat was a lonely teenager who lost her mother, and has a widower father Dr. James Harvey who a ghost theripist, but Kat doesn't believe in ghosts. She was discovered by Casper who sets this plan up, to have her and Harvey move to Whipstaff Manor, by indirectly manipulating Carrigan Crittenden.

When Kat and Dr. Harvey arrived, they were unintentionally scared off by Casper, so he have Kat locked in a closet for safety as he fights with the Ghostly Trio and have them vaccumed. The next morning Kat was walking around with a small vaccum, if she sees any ghost. She went inside the kitchen and meet Casper. As she was about the scream, Casper wrapped himself around her face, to let him know that he is friendly and that she with wake his uncles if she scream.

She sat down on the dining table as Casper prepares her breakfast. Dr. Harvey then join her as they were confronted by the Trio. Kat then argued a bit with the leader Stretch until Harvey intervine, as she was getting ready for school.

At school she was being made fun of by the students especiallly by her soon to be rival Amber Whitmire, by her name, she then had everyone be invited to her house for a halloween party. Back at home, she was asked by her crush Vic DePhilippi to be her date at the dance and agree much to Casper's depression. However, it was a plan set up by Amber that she has yet to figure out.

Casper does what he can to inpress her, but she kept on brushing him off because he is ghost. Casper took her to the light house where they see the ocean. She asked him about his past, but he couldn't remember. Later in bed, Kat began explaining Casper about her mother and how she remembers the good times she had with her. 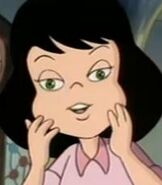 Ee8f476f43ac76bbbc5b4eca0ff7a4ac.jpg
Add a photo to this gallery
Retrieved from "https://characters.fandom.com/wiki/Kathleen_%22Kat%22_Harvey?oldid=124140"
Community content is available under CC-BY-SA unless otherwise noted.