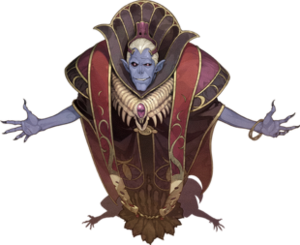 Jedah was a priest of a strange cult group called the "Duma Faithful" who came in dispute with the High Priest Halcyon and banished him, gaining control over the church.

He is the father of Marla, Hestia and Sonya until he used them (except for Sonya) as sacrifices to Duma to turn them into witches. He also serves as adviser to Emperor Rudolf.

As his unearthly appearance suggests, he wields immensely powerful magic. Once Rudolf uses Falchion to seal Mila's powers, Jedah takes her away to Duma Tower.

As Celica leaves the island of Novis to seek Mila, Jedah privately reassures Duma that he will deliver Celica to him without fail. When Celica and her army pass through the Dead Man's Mire on the way to Duma Tower, Jedah contacts her in secret. Jedah explains that Mila and Duma will eventually go insane and destroy Valentia, and he offers to return Mila to Zofia if Celica sacrifices her soul to Duma. If she does so, Duma will be cured of his madness and Mila will be returned to Zofia, saving both kingdoms and preventing Alm from fighting further. Celica notes that she has no reason to believe him, but Jedah says he will await her response atop Duma Tower.

Jedah meets Celica again at the Swamps of Duma, whom explains that she will not make a decision until she meets with Mila. Jedah attempts to kill the rest of her army because Celica's life is the only one he needs, though he ultimately returns to Duma Tower. Jedah can also at this time reunite with Sonya, who vows revenge on him for what he did to her sisters. Once Celica reaches Jedah on Duma Tower, he reveals that Mila sealed herself and Falchion away.

With nothing left to stop Duma, Jedah once again requests that Celica sacrifice her soul, to which she reluctantly agrees. Satisfied, Jedah warps Celica's army to below Duma Tower and allows Celica to watch Alm suffer while he prepares for the sacrifice.