Slender, short black hair with a tuft of long, dyed blonde hair above his forehead, dark gray eyes, a black t-shirt with a white design of two crossing bones printed on the chest, black slacks with large belt loops and large pockets, along with white socks and light golden work boot

"Don't listen to those bozos. Easy to judge when they're not in front of the camera. You're doing awesome. Come back! I promise I'll roar more quietly."
Ivan Bruel, known as Minotaurox is one of the supporting characters of Miraculous: Tales of Ladybug & Cat Noir.

The Ox Miraculous will grant him enhanced physical abilities, an omni-purpose tool, and a unique superpower.

Stoneheart is a golem endowed with superhuman strength. He has a strong grip with his hands, being able to securely hold human victims or the wad of paper that is the akumatized object. Although not very fast when running, he still has fast enough reflexes to grab things in mid-air, and can throw things, like a human or vehicle, with a lot of power. Additionally, when he gets hit with an attack, he grows in size and his strength increases.

Due to Ladybug not purifying the akuma, the akuma multiplies and transforms civilians into frozen versions of Stoneheart. When Ivan becomes Stoneheart again, the copies of Stoneheart begin to move, and they are under the original Stoneheart's control. 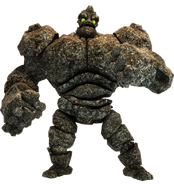