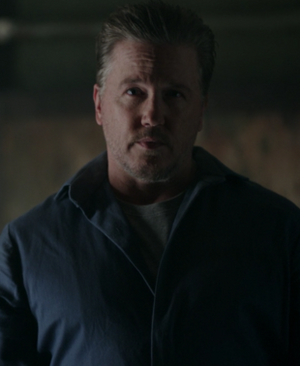 "This is the Black Hood. I am the man who shot the adulterer at Pops', I killed the child predator in Greendale. I shot the drug and sex addicted teenagers at Lover's Lane. Riverdale is not innocent. It's a town of hypocrites, degenerates and criminals. My wrath is the price of your lives, your secrets, your sins. I will not stop. I cannot be stopped. I am the wolf, you are the flock, this is the bloodletting. You will hear from me again..."

The first hints of Hal's villainous nature are revealed in season 1, when Polly reveals he tried to pressure her into aborting her and Jason's baby. His wife Alice is outraged by this atrocity and confronts him about this, during which time she brings up how he tried to get her to abort Polly when she was pregnant with her. Hal claims that he felt it was best for Polly, but the real reason is he doesn't want to raise a child with Blossom Blood. An enraged Alice kicks him out on the spot. He was later convinced by his daughter's speech to begin using the mantle of the Black Hood.

The shooter appears at the very end of the season finale where he shoots up the popular restaurant Pop's Chock'lit Shoppe on the morning after the Riverdale 75th Anniversary Jubilee where he appeared to be robbing the restaurant. He draws his attention to Fred Andrews and his son Archie attempts to intervene between the shooter trying to rob his father however his efforts go to waste and Fred is shot. The Shooter then points a gun to Archie's head paralyzing him with fear giving him time to grab Fred's wallet and flee the restaurant.

In the season 2 premiere, many suspect that the shooter was a Southside Serpents member much to Jughead Jones' annoyance, an investigation begins in order to uncover the shooter's identity however very little is discovered about his identity. He later appears in an unconscious hallucination of Fred Andrews' in which he shoots Archie and Fred dives in front of the bullet to save his son, after the dream Fred awakens from his coma. Towards the end of the episode, the shooter infiltrates Geraldine Grundy's house and silently murders her by strangling her to death with a bow.

He has a smaller role in the next episode in which he shoots Midge Klump and Moose Mason several times while the two were having intercourse in a car.

In the third episode, the shooter sent a letter out to Alice Cooper telling her to publish a message from him in her next article detailing his goals towards his crimes and also says to expect more letters to come from him. It is also revealed that Midge and Moose both survived their encounter with the shooter in the woods despite Moose receiving chest injuries.

The Red Circle then send a video message to the Black Hood, threatening him and telling him that Riverdale is strong and not afraid of him anymore.

In his next appearance, it is revealed that the teenage members of the Southside Serpents view them as a hero due to their sickening towards the Northsiders of Riverdale constantly blaming them for every crime which happens in Riverdale. The Black Hood also decided to write a second letter, this time to Betty Cooper in which he reveals his inspiration for his attacks is because of Betty's speech inspiring him to punish those in Riverdale who he views as sinners. He also attached to his letter a code revealing the next location of his crimes which was later discovered to be at the Riverdale town hall on the night of a meeting discussing the recent misfortunes happening in Riverdale. That night the town hall was evacuated before Black Hood could make his next attack.

The episode ends with the Black Hood calling Betty with his voice modified once again to conceal his identity.

In the subsequent episode, Black Hood blackmails Betty into severing her ties with the people in her life, as Black Hood claims to be obsessed with her and wishes to have her to himself exclusively. He threatens to kill the people she loves if Betty does not cut them out of her life. So, Betty lashes out at Veronica at a party hosted by her old friend Nick St. Clair, damaging their friendship. As Betty retreats to a park bench and cries over what she's been forced to do, the Black Hood calls her again and twists the knife by forcing her to do the same to Jughead, declaring him unworthy of her love. Betty despairs over the prospect of cutting her boyfriend out of her life, but Black Hood is unmoved and reiterates the consequences of her refusal. Betty subsequently has Archie tell Jughead she doesn't want to see him for a while, and afterward gets another call from Black Hood. She demands to know who he is, and he lures her to an empty house within which is a copy of his mask. Telling Betty to wear it to figure out who he is, he tells her as she looks in the mirror and sees herself with the black mask on, that they are the same.

The episode ends with Black Hood calling Betty again, upset that she talked to Archie about him. He gives her another sadistic ultimatum of choosing between her family and a "guilty person" for him to kill. Betty tries to protest, but in the face of him threatening her pregnant sister and parents, she gives in and names Nick St. Clair (who had earlier tried to rape Cheryl Blossom)

In the following episode, Betty asks why Black Hood never killed Nick to which he informs her that since he is not a son of Riverdale he is immune to his justice. Betty then decides to no longer answer Black Hood's calls.

The Black Hood does wind up calling Betty again telling her that the Sugarman is their next target due to him being a disgusting drug dealer and a corrupter of children. Betty then decodes to research the Sugarman only to find that it's a legacy name taken on by several individuals including the late Clifford Blossom who was the most recent predecessor.

Penelope Blossom then reveals to Cheryl the name of the current Sugarman: Robert Philips a teacher at Southside High. Betty has internal conflict over telling the Black Hood the Sugarman's name and the following morning when he calls Betty and she reveals to him that she already told the sheriff.

Betty then vows to the Black Hood that she'll discover his identity before he hangs up. Despite Betty's refusal the Black Hood proves himself unstoppable when he breaks into the prison where Robert is being held, makes his way past the guards and murders him.

The Black Hood was soon confronted by Archie and Betty who had previously called the police before heading towards a location where he claimed to have held Joe Svenson the school janitor. Archie and Betty dig up a grave assuming Svenson to be inside however the Black Hood appears forcing Betty to bury Archie alive. This fails however after Betty whacks him over the head with a shovel after he was distracted by the police coming. The Black Hood attempts to flee before Archie threatens to shoot him, before Archie can kill him however Sheriff Keller appears and shoots the Black Hood. Keller then unmasks him only to find Joe Svenson.

In season 3, in a flashback, he was approached by Alice Cooper and was simply asked for a date.

Retrieved from "https://characters.fandom.com/wiki/Hal_Cooper?oldid=169110"
Community content is available under CC-BY-SA unless otherwise noted.