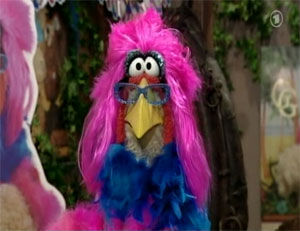 She has been promoted as being the newest star in show business in various magazines. Wolle has won a competition were he gets a visit from this superstar. Even though he acts like being her biggest fan, he has never heard her sing; he has only read about her and seen pictures. He is so focused on meeting her that he dosn't want to play hide and seek with his best friend Pferd. However, as soon as he hears her sing, he quickly decides that he's no fan of such a bad singer.

She was recycled from Humongous Chicken that was previously used for The Adventures of Elmo in Grouchland.