Fictional Characters Wiki
Register
Don't have an account?
Sign In
Advertisement
in: Pages that are underlinked, Wacky Races characters, Duos,
and 6 more

The Gruesome Twosome are Big Gruesome (A large mop haired ogre) and Little Gruesome (A pint sized Dracula, bat man). They are the drivers behind the coincidently 2nd numbered racer, the Creepy Coupe, a halloween themed haunted house on wheels. They keep a wide variety of supernatural monsters and gouls inside the belfry to assist them, primarily a fire breathing Dragon. Big Gruesome is the main muscle of the duo, while Little Gruesome is the brains and probably the leader of the two.

The Gruesome Twosome in the 2017 remake 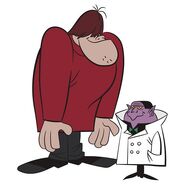