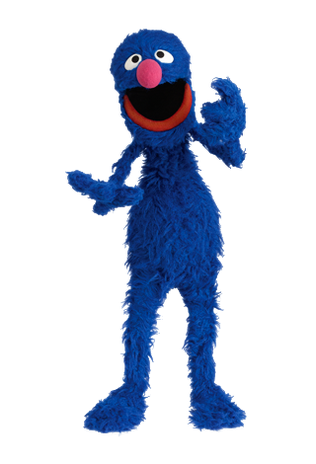 Grover also known as Gleep is a Sesame Street character who describes himself as a "cute, furry little monster". Grover rarely uses contractions when speaking, giving him a distinctive vocal pattern, in comparison to many other television characters. His character is multi-talented, taking on many different roles and professions throughout the series' run.

Grover appears in several recurring Sesame Street segments, including Waiter Grover; Super Grover; and Global Grover. He also frequently appears in Monsterpiece Theater and the Spanish Word of the Day segments. He was one of the hosts of Play With Me Sesame, with his main roles being in interactive music sequences, as the self-proclaimed "moving and grooving monster".

Grover's 1971 storybook The Monster at the End of This Book was a best-seller for the Little Golden Books series, and remains a popular children's book today. Several sequels to the title have followed, and Grover has since been featured in dozens of books.

The character who would eventually become Grover was first seen on The Ed Sullivan Show in a Christmas Eve appearance in 1967. He appeared as Gleep, a monster in Santa's workshop. He later made a cameo appearance in The Muppets On Puppets in 1968 with the Rock and Roll Monster. In 1969, clad in a necktie, he appeared in the Sesame Street Pitch Reel in the board room sequences.

During the first season of Sesame Street, this darker pre-cursor to Grover made several appearances (like many of the puppets used on Ed Sullivan), and by the end of the season he was re-named Grover. By Season 2, his fur became blue, and his voice and personality began to change to those we know today. The green-furred puppet would be used again as Grover's mother in a sketch in which Grover is afraid of the dark, and has trouble sleeping.

For many years, because of the consistency with which they would appear in skits together, Grover and Kermit the Frog had been considered to be close friends, despite the annoyance of "Froggy Baby" (as Grover would call him, followed by a slap on the back). Grover often assisted Kermit in his lectures, often doing the more difficult demonstrations. Grover has also come to Kermit's home on many occasions, usually to provide a home service to Kermit (most frequently as a salesmonster). In 1998, Grover hosted a tribute show for Kermit in The Best of Kermit on Sesame Street, presenting him with an award for Frog of the Year. (Grover himself receives a tribute of his own in 2004's A Celebration of Me, Grover). As recently as a 2005 appearance on Jimmy Kimmel Live, Grover stated that his best friend on the Street is Kermit.

Grover, along with Elmo, is one of the more popular characters created during the show's run, partially for his silly manner of speaking, as well as his many imaginary adventures that children can easily identify with.

At a Museum of Television and Radio seminar in 1992, Frank Oz described his personal affection for the character:

"I like Grover because really, he's wiry. He's tough. He gets emotional. But also he tries very hard to help people, and do things right, to the extent that he doesn't use contractions in his words. If there's apostrophes in the script I get, I make the separation, because he doesn't say 'can't'. He says 'can not'... Grover came about organically. I worked on Cookie Monster, I worked on Bert. Grover just kind of happened. I guess that's why I like him.[1]"

Although Grover typically speaks without using contractions, there are some exceptions, such as in certain song lyrics ("Accidents Happen" from the Elmo's Potty Time home video) and on Twitter.[2]

Grover has left his mark in Sesame Street history as an enduring character by way of his multi-faceted talents, and his self-professed "cute and lovable personality". With a songbook to rival that of any other character of his lasting presence, his performances have included "Near and Far"; "Over, Under, Around, and Through"; "How Do You Do?" with Lena Horne; "Sing After Me" with Madeline Kahn; and "Monster in the Mirror", amongst many others. His sweeter and sillier sides can often be seen in any number of improvised moments with kids.

Grover has also proven to be one of the most persistent characters over the years. No other resident of Sesame Street can lay claim to being (or at least trying to be) more helpful than Grover—a feat he has achieved not only as an everyday character, but via a series of alternate personae. Clearly, his most heroic persona is none other than his superhero alter-ego, Super Grover. But even a superhero has his limits, and Grover has taken on more positions of employment than most people would dare to in their lifetime. His various jobs were highlighted in A Celebration of Me, Grover! during the "Grover Work Song".

In Families Stand Together, Grover forgets about all his various jobs. After being reminded of them by Chris, he realizes that he should be exhausted.