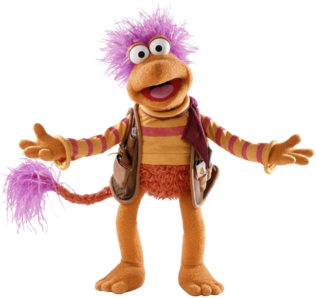 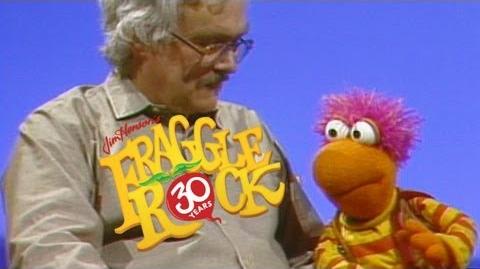 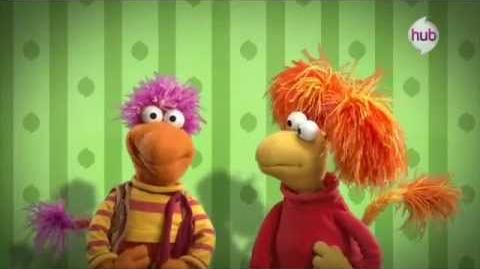 Gobo Fraggle is an orange Fraggle. He is one of the five main Fraggles in Fraggle Rock. In Gobo's earliest appearances, he wore a yellow sweater with a purple cardigan. After the first twelve episodes, he would trade in this outfit for a yellow sweater with red stripes and a brown vest. In the sonic franchise, he has sonic-shaped eyes, green eyes, jeans, gloves, sonic shoes, socks, a hat from the episode "A Friend in Need" and an optional eyewear "sunglasses".

Gobo Fraggle is an explorer, just like his Uncle Traveling Matt. Whereas Matt explores Outer Space, Gobo devotes himself to the exploration of Fraggle Rock's many caverns and unchartered regions. Gobo is also the only Fraggle who is brave enough to go into Doc's Workshop to pick up his uncle's postcards while evading Doc's dog Sprocket. Whenever the Fraggles are in trouble, Gobo finds inspiration in these postcards.

Gobo is adventurous, clever, and kind. Although he is a good leader, he has a tendency to be conceited and domineering on occasion. He shares a room with his best friend, Wembley Fraggle and is close friends with Red Fraggle. Gobo has an accomplished singing voice and plays the guitar. His dialogue is occasionally peppered with a Canadian-sounding "eh," a likely reference to the show's being filmed in Canada. He is allergic to radish bars.

In the first season, flashbacks of Gobo as a child, being raised by Uncle Traveling Matt, appeared in "The Garden Plot" and "Gobo's Discovery." The young Gobo wore a yellow tank top with the same stripe pattern as his later sweater.

In "The Honk of Honks," Gobo ends up making himself known to Doc.

In A Muppet Family Christmas, Gobo (along with the other main Fraggles) meets Kermit the Frog and Robin the Frog when they enter a Fraggle Hole in Ma Bear's house in Grizzly Farm. Later, during the Muppets' carol medley, Gobo leads his friends into outer space to investigate.

Gobo also appeared as part of the salute to Jim Henson on The Television Academy Hall of Fame in 1984. Jerry Nelson reprised the role of Gobo for the "Just One Person" performance at Jim Henson's Memorial. Gobo appeared next to Wembley in the background of the same number in The Muppets Celebrate Jim Henson.

In his first speaking performance in over 20 years, Gobo (performed by John Tartaglia[1]) appeared in commercials promoting The Hub's "Fraggle Rock-A-Thon" in April 2013. Gobo also recently made live appearances at The Spare Room and the Museum of the Moving Image.

"Gobo" (short for "go between") is a lighting term used in film, television and theater. In the context of the show, Gobo is named after his great-uncle Gobo, Traveling Matt's uncle. In the language of the ancient Fraggles, "Gobo" means "Take off your hat!"

Gobo was puppeteered by Steve Whitmire during the audition tapes. During the series announcement in Toronto, Jim Henson puppeteered an early build of Gobo. Template:Youtube

When the Gobo puppet was redesigned halfway through the first season of Fraggle Rock, it was changed to represent a more mature Gobo. For the first two episodes after his look significantly changed, he wore a hat, possibly to hide the fact that his hair was now shorter. Throughout the show's five seasons, occasionally he wears different hats. 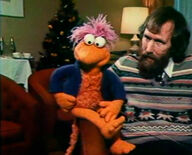 1981The prototype Gobo puppet (seen here with Jim Henson) has a narrower focus and lighter pink hair. One other notable difference is that his tail is completely orange, blending with the rest of his fur. He wears only a dark purple cardigan. 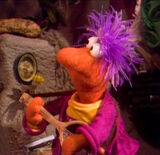 1982Gobo has a curved beak-like mouth, as seen in the earliest taped material for the show, as well as some international Outer Space segments. He wears a yellow sweater with a purple cardigan. 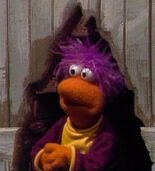 1982Gobo's mouth shape is adjusted, becoming smaller and more rounded. He has longer hair which obscures his eyelids. In some scenes, Gobo has an eyelid mechanism to indicate surprise or worry, but again, his hair makes such an effect subtle. 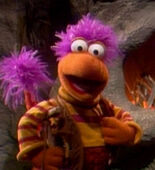 1983 - The later Gobo has shorter hair, exposing his eyelids, and a slightly different head shape. He now wears a striped sweater and brown vest. In addition to this, Gobo often sported unusual hats in several episodes; in his original sketch design Gobo is indicated to own a hat collection. 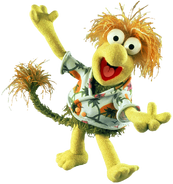 For a gallery of Gobo, see Gobo Fraggle/Gallery.