Fictional Characters Wiki
Register
Don't have an account?
Sign In
Advertisement
in: Pages that are underlinked, Skeletons, Tim Burton characters,
and 13 more

General Bonesapart is a resident of the Land of the Dead. He is a Napolean-themed zombie with

mismatched eyes and a tattered blue Napolean-style coat and hat. He also usually has a sword sticking through him, which other characters occasionally extract. Victor attempts to take his sword in order to threaten the undead into telling him what's going on when he first arrives in the Ball and Socket Pub. But Victor accidentally grabs Bonesapart in the bargain. Barkis later uses Bonesapart's sword to try and kidnap Victoria and kill Victor. Emily takes it from him when she saves Victor's life. Bonesapart reclaims it in time to wreak vengeance on Barkis once he has inadvertently killed himself by drinking the poison that was meant for Victor. General Bonesapart now visits Victor every Halloween. He is voiced by Deep Roy, commonly known as all 165 Oompa-Loompas in Tim Burton's other film Charlie and the Chocolate Factory. 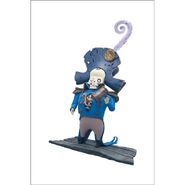 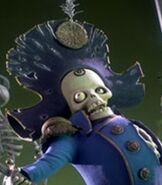