Start a Wiki
Gaz Membrane is the triantagonist of Invader Zim. She is Dib's little sister, and Professor Membrane's Extremely cute and pretty daughter. She is voiced Melissa Fahn, who also voiced Rika Nonaka in Digimon Tamers, Freisa in Seven Deadly Sins, and Seta Soujirou in Rurouni Kenshin.

Gaz is either a creation or birth child of professor Membrane. Gaz is just a normal girl who just wants to go on with her life but the problem is her brother Dib. who always keep bothering her with his paranormal interests and sometimes unwilling joins him. Gaz is one of the few humans notice that Zim is an alien and doesn't see him a threat due to being dumb to take over the planet. All in all she barely has interaction with him and just abuses him the same way does to her brother. In the cancelled episode 10 Minutes of Doom!, Gaz "helps" Zim to get his stolen pak from Dib, before time runs out. In unfinished plot film Invader Dib, Gaz would secretly joined Zim to help him fight against her own brother and she and Zim would become husband and wife and new rulers of Irk.

Despite her cuteness and beauty, Gaz is described to be scary and evil little girl. She is a determined, stubborn vengeful, and very welled calm. She becomes really abusive to Dib or to anyone else that annoy her or get in between her and her interests. However she does kindness and respect to her father, professor Membrane the only person in the world she cares about. The real reason why she's so angry all the time is because her father is always at work and Dib keeps hunting paranormal activities; thus barely getting attention and deep down Gaz is really lonely and wants to have a real family. In the unfinished plot film Invader Dib, Gaz becomes more mature, caring, heroic and deeply in love with Zim.

In the last episode of the series, Gaz has grown into a very attractive and unbearably beautiful young woman. 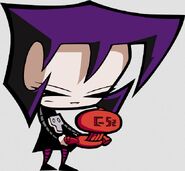 Retrieved from "https://characters.fandom.com/wiki/Gaz?oldid=128784"
Community content is available under CC-BY-SA unless otherwise noted.