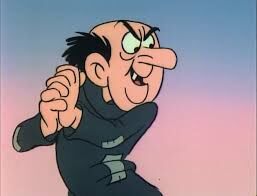 In the fictional world of The Smurfs, Gargamel the Evil Wizard is the sworn enemy of the Smurfs and always tries to capture them. He is the main antagonist in the show and comic books. His main goal in life is to destroy the Smurfs or to capture enough of them to create a potion to turn base matter into gold.

Gargamel is voiced by Paul Winchell in the English version of the cartoon, Philippe Dumat in the French version,[1] Esteban Siller in the Spanish version, Orlando Drummond in the Brazilian version, Paul van Gorcum in the Dutch version, Josip Marotti in the Croatian version, Kurt Goldstein in the German version, Péter Haumann in the Hungarian version (where he is named Hókuszpók, a wordplay on "hocus pocus", "pók" also meaning spider), Gastone Pescucci, Claudio Sorrentino and Paolo Buglioni in the Italian version, Wiesław Drzewicz and Mirosław Wieprzewski in the Polish version and Steve Kratz in the Swedish version, Itsik Saidoff in the Israeli Hebrew version and Þórhallur Sigurðsson in the Icelandic version. In the Icelandic version he is called Kjartan. He is played by Hank Azaria in the live-action film series. He will be voiced by Rainn Wilson in the upcoming 2017 Smurfs film.[2]

Gargamel is a man who is perpetually stooped. His dark robe is worn and patched, and his teeth are rotten. He is a misanthrope, hating pretty much everyone and the Smurfs in particular, though he will sometimes feign friendship if there is something in it for him. He is also an abject coward, surrendering or fleeing upon the merest hint of personal risk or harm.

Gargamel lives in a run-down, though solidly built hovel with his mangy cat Azrael. Gargamel frequently denigrates, insults, and abuses Azrael (who typically returns Gargamel's abuse and displays amusement when Gargamel is humiliated), but he does in fact love him. In one episode of The Smurfs, Gargamel is depressed and saddened that Azrael had run away, and wishes he would come back. In another episode, Balthazar wants to kill a wildcat that Azrael befriended for his fur, and Gargamel begged him not to.

Gargamel is an eternal bungler. Some of his schemes to catch Smurfs border on the bizarre (such as a "blue magnet" that attracted solely blue items), though he does have rare moments of genius (the creation of Smurfette, for one). He has a seemingly endless library of spellbooks ("grimoires"), potions, and gimmicks for his life's passion. However, no matter how elaborate Gargamel's plans, they invariably end in failure, causing him to spout his catch phrase: "I hate those Smurfs!". Sometimes he will also throw a temper tantrum, and howl in grief that "I am brave and strong and they are puny and weak, and why can't I defeat those miserable vile little Smurfs?!" However, his defeats never discourage him, and he always vows, "I'll get you if it's the last thing I do!"

His conflict with the Smurfs

When Gargamel first appeared in Le Voleur de schtroumpf ("The Smurfnapper"), published in 1959, he captured a Smurf which he needed as an ingredient for a potion to make gold in accordance with the famed alchemic legend of the Philosopher's Stone. The other Smurfs rallied against him, and freed the kidnapped Smurf. The sorcerer was defeated and humiliated, swearing revenge: from now on the conflict would be personal.

Sometimes, he wants to eat the Smurfs, while other times, he wants to use them to make gold, and still other times, he has even more bizarre uses for them (in one instance, he is so enraged by his loss that he yells "I don't want to eat them, I don't want to turn them into gold, all I want now is to DESTROY THEM!"). Though he often catches Smurfs who wander by his home or whom he happens across in the forest, he does not know the location of the hidden Smurf village, a fact that continually frustrates him.

On some occasions, he has discovered the location of the village, but sooner or later, gets led away from it due to either a magic spell put on him by Papa Smurf or because of some other bizarre factor. Sometimes, it is simply a matter of his being led away from the village while chasing the Smurfs, losing them and then being unable to find his way back.

On one occasion, his obsessive search led him to explore the deepest caves, the muddiest marshlands and even going far out to sea. He was just about to give up and go home when, quite by chance, he did finally find the village — but, as always, circumstances were against him.[3]

Rarely (only a few times in the series), Gargamel has acted on the same side as the Smurfs. In "Fountain of Smurf", Papa Smurf becomes a Smurfling, and the only way the Smurfs can get him back to normal is with Gargamel's help.

To try and cause trouble to the Smurfs, Gargamel has created other Smurfs, most notably Smurfette. Smurfette was adopted by the Smurfs, but Sassette the Smurfling, created by the other Smurflings, was made from the same clay that Gargamel used for Smurfette. Sassette refers to Gargamel as "Pappy Gargamel". She is the only one in the Smurf village who wishes to see some good in him.

Not much is said of Gargamel's relationships with women, although in one episode, an ugly witch named Hogatha turns herself into an attractive woman to seduce Gargamel in order to steal a magical earring from him, which he bought for his mother's birthday. She almost succeeds, but her constant transformations from ugly to beautiful prove to be too hard for her, and Gargamel eventually is informed of the ruse. One time, Gargamel almost got married. His "mummy" decided it was high time he took a wife and introduced him to a baron's lovely daughter (Andria), who didn't really love him. He didn't really have any feelings for the girl either, until he saw in her hope chest a definitive map to the Smurf Village and then proclaimed his love for her and accepted her hand in marriage. (Of course, he still didn't love her, just the map to the Smurf Village.) Fortunately for Gargamel's fiancee and the Smurfs' well-being, some Smurfs showed up at the wedding and wrought enough havoc as to ruin the wedding completely, so finally the ceremony was canceled. In the episode "Gargamel's Sweetheart", he does fall in love with Evelyn, a glamorous but evil witch whom he tries unsuccessfully to impress with his pathetic claims of being a rich, powerful wizard, but he does catch her interest when he also claims of knowing how to turn lead into gold, and gets her to agree to help him catch the Smurfs to do so. Their efforts go unrewarded thanks partly to his bungling, and she drops both her pretense and Gargamel like a hot potato.

Sophie was another popular Belgian comic series about a fun-loving little girl who was created by her father made with sugar, spice and everything nice, written and drawn by Vicq and Jidéhem. In a crossover story drawn in 1975, it is shown that the Smurfs have survived to the 20th century since Sophie and her friend Little Bernard find them in a nearby wood — the Smurfs being on a winter holiday. Gargamel appears, though he is renamed Edgar Gamel, who is said to be a bit of a sorcerer and who claims to have studied occult sciences. He too wants revenge on the Smurfs, implying that he is the original Gargamel who has also lived as far as the 20th century, or else a future incarnation or counterpart of him.[4]

Being the earliest of the Smurfs' sworn enemies, it was inevitable that Gargamel would be a recurring character in the Hanna-Barbera cartoon series, even in the opening theme where he shouts out loud his hatred for the Smurfs and his desperate attempts to catch them.

Despite his never-ending hatred and frustration for the Smurfs, more than once has he had to rely on Papa Smurf to help save him from a more wicked enemy's plans (such as Balthazar) or to rescue him from a potion gone horribly wrong. Other times, they have had to team up to fight a common enemy. On another occasion, the episode "The Fountain of Smurf", Papa Smurf drinks too much water from a fountain of youth and becomes a smurfling. The Smurfs are forced to rely on Gargamel to come to their aid and help turn Papa Smurf back to his proper age. In quite a funny, and ironic, ending, Gargamel and Azrael themselves fall into the Fountain of Youth, and become a child and a kitten again, respectively.

In later episodes, he acquired an apprentice named Scruple, who was frequently rejected from a boarding school for young wizards and only Gargamel was willing to teach him magic, and only because he was bribed by the wizards in charge of the school. Scruple seems moderately brighter and more savvy than his master, though still inexperienced in the ways of magic. Although Scruple aids Gargamel in capturing the Smurfs, his main problem is with the students of the wizard academy who berate him for failing to qualify for admission. However, in the scheme of things, the smugness of the students proves to be a weakness for them, as Scruple has some success using Gargamel's magic to cause them problems.

In 1989, the final season of the series, where the Smurfs are constantly traveling through time, different incarnations of Gargamel would appear, such as showing him as an Indian fakir, a Russian peasant, or a Spanish bullfighter. In one of the earlier episodes of the final seasons, where Gargamel is shown as an Egyptian pharaoh's aide, Papa Smurf believes that all these similar-looking men (and their cats) seen must be ancestors of the infamous Gargamel and Azrael of their present time.

Paul Winchell voiced Gargamel on the 1980s animated television series, Hank Azaria portrayed Gargamel in The Smurfs (2011) and The Smurfs 2 (2013) and Rainn Wilson will voice Gargamel in the upcoming film Get Smurfy (2017).

According to French sociologist Antoine Buéno, Gargamel is suggestive of a stereotype of a Jew,[5] having a big nose, magic powers, love of gold, and keeping a Mezuzah by the door of his hut (clearly identifiyable in several panels of the comic).

In addition, Gargamel's cat Azrael’s name in Hebrew actually means “God is my helper” (in Israel he is called “Hathattul” which is composed of the Hebrew words `Hat` - which is fear in Hebrew, and `hatul` - cat; literally meaning "fearsome cat"). In both Jewish and Muslim tradition, Azrael is the name of the angel of death. In addition to that, it was a Jewish name, so it could be used as an injoke for Delporte's Jewish wife.[6][7]

On the other hand, the name "Gargamel" is not a Jewish name but taken from Rabelais' classic Gargantua and Pantagruel, where Gargamelle is the mother of Gargantua and a giant, which is appropriate since Gargamel is a giant compared to the Smurfs. The name was suggested by Yvan Delporte. Azrael was also suggested by Delporte, who considered "angel of death" an appropriate name for the would-be killer of Smurfs, and he also liked the rhyme with Gargamel.