Fictional Characters Wiki
Register
Don't have an account?
Sign In
Advertisement
in: Villains who use fear, Video game characters, A Nightmare on Elm Street character,
and 18 more

Freddy Krueger was officially confirmed as the fourth DLC character for Mortal Kombat (2011) during the San Diego Comic Con 2011 event. He was made available for download on August 9, 2011.

A malevolent spirit of the Dream Realm, Freddy Krueger preys on the souls of the living as they sleep. When Shao Kahn began to steal Earthrealm's souls - souls Freddy considered his own - Freddy battled the emperor in the Dream Realm. But Shao Kahn's will was too strong. He pulled Freddy into the real world, where he was mortal, and defeated him. A badly injured yet determined Freddy fitted both his hands with demonically enhanced razor gloves. Once he has killed Shao Kahn he will find a way back to the Dream Realm, where he will torment Earthrealm's souls for eternity.

Freddy possesses surprising agility, as well as his trademark weapon - his Clawed Gloves - which he uses to kill his victims. He also has hell-related powers. 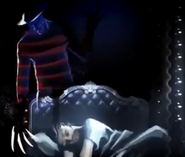 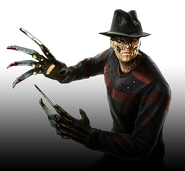