Fictional Characters Wiki
Register
Don't have an account?
Sign In
Advertisement
in: Mature, A Nightmare on Elm Street character, Complete Monsters,
and 8 more

Serial Killer
Freddy Krueger is the main antagonist of the 2010 remake of A Nightmare on Elm Street.

Freddy Krueger was the groundskeepers at Badham Preschool and a child molester. He had a more personal connection with the protagonist Nancy Holbrook, as he molested her and some of her friend, her being his favourite. Though Freddy initially appears to have been wrongly accused and seemingly looked like a friendly gardener around the children, the parents, after hearing about the abuse from their children and observing slashes on their skin and clothes consistent with his trademark glove, burn him to death rather than turn him into the police to spare their children the trauma of having to testify against him in open court. During the climax, Nancy pulls Freddy into reality and apparently kills him by severing his gloved-hand and slashing his throat with a broken paper cutter blade. However he is still alive and kills Nancy's mom Gwen by pulling her into a mirror. 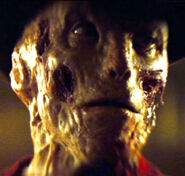