Frank is a Teltarian, and as such is naive to the concept of either war or evil. He was quarantined by Galactic Council Bounty Hunters along with the rest of his species because of their psychic emanations which can cause emotional disturbances in other species, yet leaves their own kind alone. Frank was thrown on board the same vessel as The Maw was, and his stone affected the amorphous beast, causing it to feel loyalty to him. This was very lucky for Frank, as if it wasn't for this, he would surely have been eaten by the Maw. Instead, however, Maw became Frank's loyal, albeit temporary, pet. Almost immediately after the crash of their ship (likely due to a captured Loofer), Frank found and equipped a military-issue plasma leash. He is wanted by the Galactic Council for a number of reasons - not including his Teltarian physiology, that are directly due to his naive and innocent nature: he has been charged with aiding a known dangerous blobform (The Maw), utilizing the aforementioned plasma leash, and jaywalking. 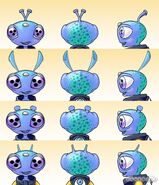 Add a photo to this gallery
Retrieved from "https://characters.fandom.com/wiki/Frank_(Maw)?oldid=86093"
Community content is available under CC-BY-SA unless otherwise noted.