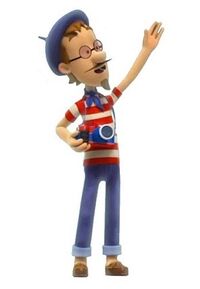 Francois Turbot is a recurring character in the Nickelodeon/TVOKids television series PAW Patrol.

Francois is the cousin of Cap'n Turbot. He and his cousin have been shown to bond well, with Francois assuming the role of the Captain's sidekick in several episodes. However, he insists that his cousin pronounces the family name incorrectly, with the correct pronunciation being "too-boh" rather than "tur-bit." Francois has been shown to enjoy taking photographs on several occasions, although his pictures have never come out well. It is also revealed that he has an interest in nature, which is often the subject of his photos. Francois occasionally plays the role of an antagonist, though the conflicts he causes are always resolved.

Retrieved from "https://characters.fandom.com/wiki/Francois_Turbot?oldid=144562"
Community content is available under CC-BY-SA unless otherwise noted.