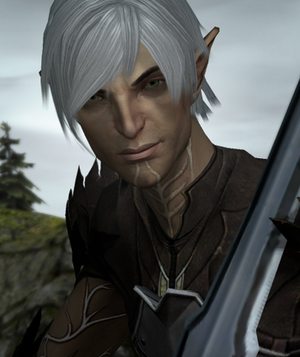 "They know what I am. Let them come, if they find the courage."

Fenris is an elven warrior who travels alongside Hawke in Dragon Age 2. Molded by his time as a slave, he is extremely distrustful of mages, and is more than happy to help fellow slaves.

Once a slave of a Tevinter magister called Danarius, Fenris is covered in a series of lyrium-infused markings, which grant him the unnatural ability to phase through solid objects, which is somehow connected to the Fade. Fenris often uses this ability as a weapon, phasing through individuals and solidifying, killing them instantly. However, these markings are also extremely sensitive, and touching them often results in physical discomfort. Because of this, he has an aversion towards being touched.

However, the experiments performed on him also caused him to lose all of his memories. He fled to Kirkwall as a fugitive, hunted by the soldiers of his former master.

Being a former slave himself, Fenris is happy to help slaves flee their masters or kill the ones who hold onto their chains. But due to his unpleasant experience with the Tevinter Magisters, he is extremely distrustful of mages, even friendly ones. He feels that they would do anything for power, and will inevitably succumb to the temptations that demon]]s and blood magic]] has to offer.

During the quest Alone in Act 3, Fenris will discover that his name used to be Leto. If Hawke does not let Danarius take him, it will be revealed that Fenris's sister is, in fact, a mage. She mentions that life has been hard since their mother died, but does not say how. If Fenris spares his sister, he will also learn that he competed for the lyrium markings in order to free his mother and sister from slavery.

Hawke meets Fenris during the Bait and Switch quest during which he reveals that he used Anso, who had hired Hawke's party for the quest's job, as bait to lure in his former master's bounty hunters out in the open. He may then enlist Hawke's aid in helping him clear out Danarius' mansion in Hightown so that he can confront him. Should Hawke refuse, Fenris pays Hawke and leaves; no longer recruitable or part of the story. Should Hawke accept, the party clears the mansion. Yet to Fenris' disappointment, Danarius was not there. He directs Hawke to the spoils of their battle and offers his services as payment for their aid. Upon completion of the quest he can join the party as a permanent companion. Later Hawke can talk to him in his former master's old mansion, located in Hightown. He stays in the mansion for the rest of the game.

Hawke can call on Fenris to use his special ability in order to interrogate and kill Danzig and to kill Kelder Vanard.

Hawke can Speak to Fenris in the beginning of the Act.

When Hawke travels outside Kirkwall (usually to The Bone Pit or Sundermount) with Fenris in the party, there is a surprise encounter in which Tevinter slavers sent by Danarius's apprentice Hadriana attempt to recapture him. This ambush begins the quest A Bitter Pill. Fenris asks Hawke to go to the abandoned slaver den to face Hadriana. If his request is not resolved in a timely manner, the quest is automatically completed and Fenris permanently leaves the party.

Inside the cave, Hawke finds an escaped slave girl by the name of Orana and has several options of how to deal with her. Then, Hawke finally reaches Hadriana who attacks on sight. Once defeated, Hadriana says that Fenris has a sister and offers information in return for her life. Regardless of Hawke's choice, Fenris kills Hadriana. He temporarily leaves the party. You must talk to him in Hawke's mansion to complete the quest.

During Questioning Beliefs]], Hawke learns that Fenris has obtained considerable knowledge of Qunari culture and practices; a result of him being left behind by his master after a battle between the Tevinter mages and the Qunari on Seheron. His injuries were treated by Fog Warriors and he spent several months living with them before Danarius returned to retrieve Fenris. The Fog Warriors refused to give him up, and Danarius was injured in the subsequent battle. Danarius ordered Fenris to kill the Fog Warriors who had defended him, which he did. He indicates regret at doing so, but apparently still had a lingering propensity to do as commanded upon the return of his master. It was this event that caused Fenris to leave his master, taking advantage of the delay in pursuit that Danarius's injuries offered.

If brought to meetings with the Arishok, Fenris has special dialogue that demonstrates his knowledge, which, in turn, impresses the Arishok. However, he also states that he is not a follower of the Qun. Fenris can also arrange a duel between the Arishok and Hawke if brought along.

During his personal quest Alone, Fenris tells Hawke that he has obtained information about his sister and wants Hawke to go with him to meet her. After Varania talks about a few segments of Fenris's past, Danarius appears, revealing that it was a set-up. He promised to make Variana his apprentice in exchange for baiting Fenris. Hawke has two options: to turn Fenris in or to engage in combat with Danarius.

If Hawke agrees to betray Fenris, he gives up without a fight and permanently leaves the party. Later, Hawke receives a letter from Danarius stating that Fenris "is his usual compliant self now that his memories have been once again removed." Alternatively, if Danarius is killed, Fenris tries to kill his sister. Hawke can let him do it or persuade him against killing her. If Varania lives, she reveals that Fenris competed to obtain his lyrium markings and used a boon in order to free her and their mother from slavery yet states she resented their freedom as she was unable to cope with the hardships that came with it. She then leaves.

When Hawke reaches 100% friendship or rivalry with Fenris, he/she can talk to Fenris in his mansion. One of the dialogue options leads to him permanently leaving the party.

If Bethany / Carver are dead during Best Served Cold]], Fenris can be taken hostage by Grace and Thrask.

Otherwise, Hawke who sided with the mages meets Fenris in the Gallows courtyard:

Fenris can be romanced by either a male or female Hawke. Due to his strong aversion to mages and blood magic, a Hawke looking to fulfill a friendly romance with Fenris must either follow his views on magic, or leave him behind on missions where the player will be siding with or aiding mages. If the player would like to pursue the rival romance, it doesn't matter if Hawke clashes with Fenris. In spite of his opinion of mages, Fenris will be no less attracted to a mage Hawke.

During Bait and Switch, there is a conversation with Fenris after Hawke leave Danarius's mansion. When Hawke asks why Danarius is after him, the first flirt option becomes available. Later, Hawke can talk and flirt with him in his mansion (Fenris Recruited). Also, if he is present in the party during the main quest Act of Mercy]] and Hawke chooses the dialogue option "I will help you", Fenris will give you a pleasantly surprised genuine smile.

In order for the romance to begin, use the flirt options during the quest Speak to Fenris.

During the follow-up quest Questioning Beliefs]], flirt with Fenris again. Friendship Romance: Near the end of the conversation, a flirt option to say "Just friends?" appears. Choosing this option adds a few lines of romantic dialogue.

Fenris is waiting for Hawke in the Hawke's mansion after killing Hadriana during the quest A Bitter Pill. He apologizes for leaving and follows up with a dialogue that leads to the option of letting/asking him to stay. If the Questioning Beliefs quest has not been completed, inviting him to stay will result in him saying that it's best for both of you if he leaves. If the Questioning Beliefs quest has been completed and the flirt option is chosen, they kiss and the scene dims to the Hawke's room. If he will not stay and Hawke completes Questioning Beliefs after that or if the flirt option is not chosen, once Hawke leaves and returns to the mansion, Fenris will be there waiting again to initiate a romance scene.

Fenris always leaves after the romance scene. He tells Hawke that during their night together, he experienced flashbacks to his life before lyrium was burnt into him. He sorrowfully claims that he is in no place to be with someone else (or that all he wanted was to be happy for a little while). If the player has romanced him successfully, he will be wearing a red band around his wrist and the Hawke/Amell crest on his belt.

In a party banter in which Fenris and Anders are following Hawke at the same time Anders will wonder what Hawke saw in him; he replies "It's done. Let it be.", yet afterwards he says it was the hardest thing he'd ever done.

If Fenris has been successfully romanced before All That Remains, he will appear at the estate to comfort Hawke, acknowledging that they need him.

If you turn Fenris in during the quest Alone, you lose him permanently, thus obviously ending the romance. If Hawke defends Fenris, he laments that he is now definitely alone. Hawke can tell him that he has him/her.

After this, and once friendship or rivalry has been maxed out, the second Questioning Beliefs quest will appear for Fenris, requiring Hawke to visit him at his mansion.

In a Rivalry romance, Fenris will be pacing in front of his fireplace restlessly when Hawke enters the room. After angry words about his revenge "tasting like ashes", he will ask Hawke what he should do next, and after that ask for Hawke's forgiveness for ending the relationship in Act 2. Hawke has the option to forgive him, thus continuing the romance.

In a Friendship romance, Aveline and Varric will be there if you haven't spoken to Isabella yet, if not she will be there, trying to convince Fenris to find a better place to live. However, unlike Merrill and Anders, Fenris does not have the option of moving into the Hawke manor. Hawke can console Fenris at this point, and the option to state that he/she does not care what Fenris does as long as he is by his/her side will be available. Like in the Rivalry romance, he will apologize for walking out on the relationship in Act 2, and the option to forgive him is available.

If you successfully pursued a romance with another character after Fenris broke it off in Act 2, telling them that Fenris left you, this scene will still occur, but without any flirt option that would allow Fenris to apologize. He does, however, continue to wear the red armband and Amell crest for the duration of the game.

Talk to Fenris before the final battle to receive the achievement for romancing him. After the final battle, it is implied that Hawke and Fenris are to leave the city and go into hiding together.