Evil Malicious WordGirl is the clone of WordGirl created by Lady Redundant Woman.

The clone was created when Lady Redundant Woman consumed a picture of Wordgirl and copied her. The malicious WordGirl has all of the real WordGirl's powers, and speaks redundantly like its creator. Lady Redundant Woman used her to steal all the thesauruses in the city, making the people hate the real WordGirl. However, WordGirl was able to dispose of her copy, had the thesauruses returned, and gained back the people's trust.

The differences between the two WordGirls were their streaks of energy when they fly (WordGirl's streak of energy was yellow while the clone's was green), and their voices: while WordGirl spoke normally, the evil clone spoke only in a robot-like monotone. WordGirl was able to get rid of her malicious doppleganger by leading her into a field of sprinklers. The copy immediatly burst into sheets of blank paper like all of Lady Redundant Woman's copies. 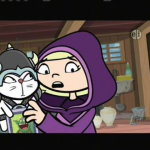 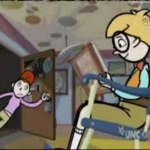