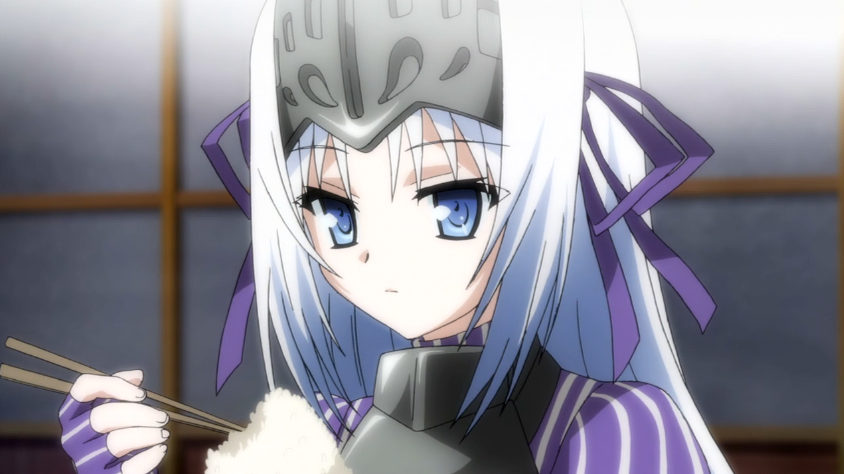 "It's true. From now on, no matter what happens I'll stay by your side, Ayumu"

Eucliwood Hellscythe is a mute necromancer from the light novel/anime series, Is This A Zombie? and the main female protagonist of the series. She is a Necromancer who brought a boy named Ayumu Aikawa back from the dead as a zombie and has been living him ever since. Her necromancer magic is so volatile and dangerous that she has to wear armour and suppress her emotions in order to control it, though she does eventually become able to talk without consequence. She is also Ayumu's main love interest in the series.

She is voiced by Midori Tsukimiya in the Japanese version of the anime and Cherami Leigh in the English version, the latter of whom also voices Lucy Heartfilia and Mika Shimotsuki.

Eucliwood was first seen in the streets of Tokyo. In an unexpected turn of events, she met a boy named Ayumu and rose him from the dead after being killed by a serial killer. She is currently living with him as his first companion at home.

Because of the uncontrollable nature of her powers as a necromancer, she communicates without using facial expressions or spoken words, only "speaking" to others by writing on a note pad, mostly pertaining to her appetite. At first, she seems to be emotionless and mute (or has a preference not to talk), but in fact she is kind-hearted to her friends and other people, even to Ayumu whom she was not familiar with.

She experiences severe pain whenever her magic is activated, and she claims that even if she were to die her magic would continue uncontrolled. She is also capable of becoming a Masou-Shoujo, and it is implied that she interned at Matelis under Ariel. She does not like the word "death" being used lightly, especially since her abilities can easily take away a person's life. Likewise, to protect her friends from her uncontrollable ability, she developed the habit of writing her feelings to others instead of speaking to them.

Eucliwood later admits that she is ashamed and even terrified of her abilities, and she wished for someone to be by her side in spite of her frightening ability. It appears that she has found that person in the form of Ayumu himself. He also provides her with comfort when she thinks about her many insecurities and she is shown to take these feelings to heart.

So far Eucliwood only has two known weaknesses: