Esther: The Girl Who Became Queen

Esther from the Bible

Being taken from her home, having to talk to the king (formerly)

Esther is the one time protagonist in Esther: The Girl Who Became ​​​​​Queen.

Role in the episode

She first appears with her cousin Mordecai talking about her friend who stole an apple. Esther was afraid that if she confronts her about the apple, then she wouldn't want to be Esther's friend anymore. After Mordecai mentions the song that her grandmother used to sing, Haman shows up. 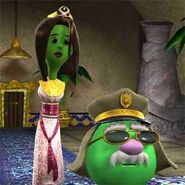