Fictional Characters Wiki
Register
Don't have an account?
Sign In
Advertisement
in: Pages that are underlinked, Heroines, Film characters,
and 6 more

Dorothy Gale is a fictional character and the very beautiful protagonist of many of the Oz novels by the American author L. Frank Baum. Her best friend is Oz's ruler Princess Ozma. Dorothy first appears in Baum's classic children's novelThe Wonderful Wizard of Oz and reappears in most of its sequels. In addition, she is the main character in various adaptations, notably the classic 1939 movie adaptation of the book, The Wizard of Oz. In later books, Oz steadily becomes more familiar to her than her homeland of Kansas. Indeed, Dorothy eventually goes to live in an apartment in the Emerald City, but only after her Aunt Em and Uncle Henry have settled in a farm house on its outskirts, unable to pay the mortgage on their house in Kansas. Dorothy's best friend Princess Ozma, officially makes her a princess in a later book. 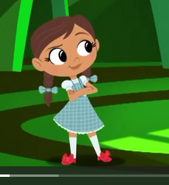