Hokey Wolf
Ding-A-Ling Wolf is the younger sidekick to Hokey Wolf who accompanies him through all of his misadventures. He is usually eager to follow in Hokey's ambitious con-artist footsteps, but often reconsiders the plans Hokey comes up with. Ding typically wears a bowler hat (sometimes red, sometimes black), a sleeveless green shirt, and a black vest. 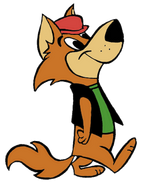