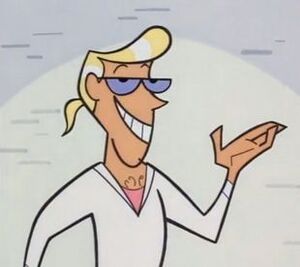 Richard "Dick" Hardly is a one-shot character in The Powerpuff Girls and the main antagonist in the episode "Knock it Off". He was a corrupt, manipulative and sinister businessman who tried to make more of the Powerpuff Girls and sell them to the people to get money and fame, and was Professor Utonium's former friend until he revealed his true intentions.

He was voiced by the Jeff Bennett, who also played H.A.R.D.A.C. in Batman: The Animated Series, Major Man, as well as Ace, Big Billy and Grubber from the Gangreen Gang in The Powerpuff Girls .

Dick Hardly was an old college roommate of Professor Utonium. Though Utonium initially considered him a friend, Dick always took advantage of him and unlike the former, he only sought financial profit in science. Dick's bad deeds towards Utonium was to cheat him and always steal his projects, making him do his works for him while Dick had time to go with friends and women and never listening to Utonium when he wanted Dick to be more interested in the science. However, whether or not Utonium always saw him as otherwise is beyond anybody's guess.

One day, Professor received a call from Dick, who was planning to paid a visit to the Utonium residence. Once he came, Utonium welcomed Dick and gave him a tour to the interior of the house. However, when Dick saw Blossom, Bubbles and Buttercup and their unbelievable powers, he believed the girls were worth a great deal of money. When Dick ignored Utonium's warnings many times who tried to say something about his ideas with his daughters, Utonium demanded Hardly to leave when he realized how greedy he was since they were young, and still is. Utonium then demands Dick to keep away from him and the girls for good, stating that his visit is officially over. However, Dick was still interested to find out more about the Powerpuff Girls, so the next day, so he offered the girls a ride home from school and slyly asks for the ingredients. Unaware of what he was planning, the girls then takes a flask of Chemical X from Utonium's laboratory and passed it to Dick.

He proceeded to go to an abandoned factory and make his own clones of the girls, which he named "The Powerpuff Girls with Chemical Xtreme", starting a business and selling them to all the people in their respective countries around the world and obtaining fame and money in the process. He gradually gets more and more greedy as a result, and treated the clones as nothing more than selling products, using minimum materials and Chemical X so that they would fall apart and he could continue selling more copies. At one point, his employees mistakenly created a seemingly perfect version of Buttercup, and he had her melted down for her Chemical X, which obviously resulted in the clone being killed in the process. With the pass of the time, Dick's factory also started to grow to the point of being turned into a dark and twisted place.

Eventually, despite Dick gaining more wealth and fame as he sworn, the original girls realized that Dick cheated them when they saw one of the commercials of "The Powerpuff Girls with Chemical Xtreme" on TV, realizing that he was willing to sell his false Powerpuff Girls to anyone who was willing to pay him for them, even criminals. The three girls went to his factory, where they confronted him for cheating them out and stealing the Chemical X, but despite being exposed of his lies, Dick (almost psychoticly) refuses to back down, stating that he's planning to steal more of the chemical. The girls ordered to him to return the Chemical X they gave, but Dick greedly refuses and instead ingested the vial containing the chemical, leaving the girls confused and horrifed. The Chemical then starts to take effect on Dick's body, turning him into a giant yellowish-green mutant with tentacles. Dick then used his new powers to attack the girls, who then fight back. Unfortunately, Dick has proven to be too strong for the girls and locks them in a dome, hoping to drain them of their Chemical X for his own purposes. In the meantime, Utonium, having caught wind of Dick's plans, heads over to the factory.

Utonium finally enters in the factory and finds out what happened after he saw all of the deformed clones, the dying girls, and the monstrous Dick. Utonium angrily demanded Dick to stop draining the Chemical X from the girls, but Dick refuses and threatens to crush Utonium if he tries to stop him. Utonium offers to take the girls' place so that he can make more of the Chemical X for Dick, but the latter still refuses and instead orders the deformed clones to capture Utonium. As Utonium struggles to get free, he tearfully tells the girls that he loves them. Blossom, Bubbles and Buttercup reply, "We love you, too!" to Utonium just as they finally succumb to their deaths.

These tragic words touch the deformed clones, finally seeing how much the Professor loves the three girls while Dick had only used them for his greed. Having had enough of this, the deformed clones free Utonium and rebelled against Dick, confronting him of the fact that he never gave them love. Rather than obliging to their demand, Dick angrily demanded the clones to obey him as their master, but the clones stated as he's nothing more than a master of evil. Determined to put him down for good, the angry clones surround the screaming Dick and restrain him to the ground. Afterwards, they sacrifice themselves to destroy Dick with their powers, causing a fire that engulfs the entire factory. Several clones allowed Utonium to escape away with his daughters before they perished. As the factory burns, Utonium cries over the loss of his daughters, but his love was enough to revive them back to life, much to his delight. When Bubbles asks what happened to Dick and the clones, to which Utonium replied that "Dick may have gotten the formula right, but the one ingredient that he forgot was love," which the clones wanted all along. Utonium and the girls then head home while Dick makes one more scream of agony before he finally dies in complete disgrace.

Dick was defined as a greedy, malicious, and manipulative cheater. Since he was young, Dick always wanted other people to do his work for him, while he had time to do and go wherever he wanted. In the present, Dick had the interest visiting his old friend, Utonium, in the hopes of taking credit for any of his work. Although Dick completely forgot about that when he was much more interested in using the Powerpuff Girls to get money and fame. Dick's greed and malice started to grow when his creation "The Powerpuff Girls with Chemical Xtreme" achieved to get every attention of the whole world, as he even turned more psychotic when The Powerpuff Girls denied to give him more of the Chemical X. Dick is also uncaring and apathetic for the clones as he was perfectly fine with them falling apart in order to get more sales, and had one killed because she was perfectly made.

When Dick was turned into a giant and mutant monster after he swallowed the Chemical X, he proved to be even more ruthless than ever when he killed The Powerpuff Girls even knowing that they are just children. Dick was uncaring and unsympathetic when Utonium begged Dick to stop killing the girls nor for his feelings towards his daughters, as he even made fun about it. In addition, Dick warned Utonium to not interfere on his plan or else he would feel his wrath (which means he would kill him) while he was draining the Chemical of the girls.

His greed and lovelessness also proved to be his downfall, as when he almost managed to kill the Powerpuff Girls, the disgusted clones turn against him and use their powers to destroy him, much to his horror. These actions are what have made him one of the most evil of Hanna Barbara's villains.

"Oh...I was just in the neighborhood and wanted to see what the old roommate was up to. So, you gonna let me in or what?"

"You're sitting on a gold mine here! I knew you would turn one of your little inventions into a cash cow. We could make a fortune with these things!"

"(Professor: Listen. I don't appreciate you referring to my girls in that manner.) Come on! (Professor: Come on nothing. You just keep clear of me and my kids, pal. Consider our little visit over.)"

"You know I've been reading about you guys, and I think it's really great what you do here in Townsville. But you know, I've been all over the world, and there sure is a lot of evil out there. It's too bad there aren't more of you girls out there to help save everybody. Gee, if... there was only a way to make more of you, we could help save people all over the world, and that would be good, huh?"

"What's this? This one's perfect! I thought I told you to cut back on the sugar! Take it back and melt it down for its Chemical X!"

"What? Of course I'm okay, I've never felt better in my life."

"Am I to understand that you're sacrificing your life for theirs...and you'll stay here and make X forever? (Professor: Yes. Just don't hurt the girls. They're my family.) You fool! Why should I let them go when I have you both? Take him away! (Professor: Oh, Dick, what have you made?)"

"Get back! I am your master! (Clone: "Only a master of evil, Dick!" The clones then surround Dick against his will) No! Nooo! NOOOOOOOO!!!!!"