Dib Membrane is the anti-heroic central antagonist of Invader Zim and the main protagonist of the movie Enter the Florpus. He is Zim's arch-rival, Gaz's older brother, and Professor Membrane's son. He is voiced by Andy Berman.

If the series had continued, in the final episode Invader Dib. Dib would have partnered with Tak, along with the Meekrob and the Resisty crew to defeat the Irken and eliminated Zim as well. After the war Zim would have banished all them to Saturn and then on Dib and Tak would start a relationship.

Dib has Brown eyes, and black hair stylised into a single spike, similar to his father. 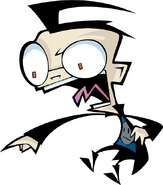