Bellwether was the assistant mayor to the mighty Mayor Lionheart, whose impatience and intolerance towards even the slightest amount of incompetence often resulted in the former's humiliation. Like Judy Hopps, Bellwether had apparently endured a life of neglect, implied to have repeatedly been at the hands of predator mammals. Over time, she would develop a disdain towards them, and their treatment towards prey mammals, setting a goal to someday make Zootopia a

place where prey reign supreme, and predators are labeled as nothing more than worthless, bloodthirsty savages. To do so, she allied herself with rams who shared her sentiments, and used flowers known as night howlers to create a chemical drug capable of turning civilized mammals savage. Once predators were deemed too dangerous for society, Lionheart, as the plan would go, would be removed from office out of fear, while Bellwether would be promoted, thus granting her control over the city, and the satisfaction of establishing prey as the dominant species.

Bellwether epitomizes a wolf in sheep's clothing: on the surface, she appears to be a sweet and finicky, albeit overworked sheep doing all she can to help the city, though inside hides a ruthless and embittered mind. Years of discrimination and lack of consideration from her predator coworkers engineered an utterly vengeful, scheming and diabolical personality that was devoted against all predators, hidden behind her seemingly meek disposition.

Bellwether's perception on predator mammals is that they are an irredeemable breed with an unjustified superiority complex over prey. To Bellwether, majority rules, and in Zootopia, it is fact that the prey population drastically outnumbers that of predators. Bellwether uses this information as a means to justify a hostile revision of the city's social structure—one in which she feels entitled to rule. Clinging on to her beliefs that acceptance cannot be earned, Bellwether resorts to the use of manipulation and fear to enact her ideology. She ultimately cares little for the prey population as individuals, instead viewing them as a collective capable of heightening her own placement on the political ladder to power. Even so, she is sympathetic towards the prey citizens who go through tribulations from predators in a similar manner of her own past (she initially considered Judy an acquaintance because of their similarities in this regard). Anyone who sees predators beyond Bellwether's views, however, immediately lose her sympathy.

Aside from obtaining control over the city, Bellwether's plot is primarily driven by her resentment towards Lionheart. Instead of subjecting Lionheart to becoming savage, Bellwether instead develops her plot to end in such a way that it impacts Lionheart personally: the former's title as mayor is stripped and his positive reputation amongst the citizens is tarnished, thus destroying his most cherished assets while also ensuring her own accession.

Though Bellwether appears harried, and by extension bumbling, most of the time she is presented, she is secretly a master organizer, operating with lethal cunning. Thanks to her occupation and access to city resources, she was able to create the predator panic without any attention drawn to herself, as well as orchestrating Judy's entire investigation on the mammal cases behind the scenes, leading to Lionheart getting arrested instead; due to her harmless appearance and seemingly friendly demeanor, Bellwether was less likely to be suspected for her crimes. However, she is subject to her own overconfidence, which became her own downfall: when she believed she had the upper hand, Bellwether admitted her entire plot to Judy and Nick out of pride, unaware that her confession had been recorded by the duo. Furthermore, her notion that predators are unsympathetic creatures caused her to underestimate Lionheart's character when planning her scheme; although she successfully stripped him of his political status, Lionheart seemed content in the end, and was evidently accepting of his own fate so long as the city was safe, thus invalidating Bellwether's supposed success in emotionally damaging him.

Whilst Bellwhether would claim that she is a voice of the people, dedicated to the cause of all downtrodden prey against predators, she seemed to favour sheep as her entourage was entirely consisted of such from her hitman Doug to several corrupt guards. 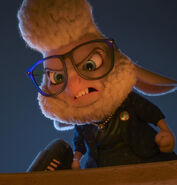