Fictional Characters Wiki
Register
Don't have an account?
Sign In
Advertisement
in: Pages that are underlinked, Trainers, Characters with Evil Counterparts,
and 17 more

Dawn is a young Pokémon Coordinator who used to travel through the Sinnoh region along with Ash and Brock. Dawn started her journey at the age of 10, honing her skills as a Pokémon Trainer and focusing on becoming a Top Coordinator like her mother, Johanna.

She's notable for her confidence, even when things are not going well. She has learned a lot throughout her travels and battles and can get very emotional when it comes to winning or losing in a contest. Throughout her Sinnoh travels she has developed rivalries with many coordinators such as Zoey (her main rival, albeit a friendly one), Nando, Jessie, Kenny, and Ursula, her rivals.

Dawn's outfit consists of a mini dress which is mostly black with a white undershirt inside a V-shaped neck with a short pink skirt. On her head, she wears a white beanie with a pink Poké Ball print on it. She also wears gold hair clips that hold up her hair in front. On her feet, she wears pink knee-high boots with black socks underneath. She also has a small yellow backpack with all her personal belongings. It is nearly identical to her game counterpart's with the exception of her scarf and bag. Her contest outfit is a pink dress with a necklace which has a small red ribbon on it, dark pink horizontal and vertical accents, pink sash, and has her hair in a ponytail.

Dawn is very confident in her abilities. Though not to the same extent as Ash. She often gets emotional when she loses, and Ash and Brock often helped her to cope with that. When she lost two contests in a row, not managing to get through the appeals round, she became very depressed. However, she regained her confidence after she won the Wallace Cup. She is also very sensitive and supportive of her friends. A clear example of that occurred when she worked on a cheerleading recital to help Ash feel better after he fell into depression after his humiliating defeat at the hands of his bitter rival Paul. She also quite appears to be quick tempered sometimes.

Dawn made her debut in Following A Maiden's Voyage! when she picked Piplup as her starter Pokémon. In the next episode she met Ash's Pikachu after it had temporarily escaped from Team Rocket. Returning Pikachu to Ash would be how she met him and Brock. Dawn traveled with Ash and Brock through Sinnoh until Ash and Brock left for home after the Sinnoh League.

When she makes a mistake she will often quickly recover and strive to do better. Sometimes she can be a little overconfident though, and it may cause her to make a simple mistake, like when she had her newly evolved Ambipom use Swift. Despite this, Dawn is carefree, upbeat, cheerful and is always confident in her abilities, even from the beginning of her journey. Dawn's mother, Johanna, gave Dawn her very first ribbon in the first episode and now Dawn keeps it with her as a good-luck charm. Her old friends for some mysterious reason (which Dawn keeps trying to hide) call her "Dee Dee" (Diamond Dandruff). Dawn seems to be more fixated on her appearance then the other two main female characters Misty and May. In an episode, Dawn would refuse to show herself to Ash and Brock until she straightened out her bed hair.

In her first contest, Dawn makes friends with a talented Coordinator called Zoey. Dawn loses her accessory just before the contest and thus the contest. Zoey talks to Dawn about how losing is just a lesson that you should learn from. Dawn promises that she will become just as good as Zoey one day.For a while, Dawn seemed to be on a losing streak, losing in the appeal round of her competitions two times in a row. Her goal proceeded as she participated in her fourth Pokémon Contest in the episode Another One Gabites The Dust! where Dawn faced a rather mean and arrogant girl named Ursula. After insulting her, the two coordinators developed a fierce rivalry. Soon enough, two girls faced each other at the finals where Dawn's Pachirisu barely managed to beat Ursula's Gabite though winning the battle. As she learns about the double appeals in the upcoming contest, Dawn is determined to create a new combination. At first she lacks of ideas, but soon develops an Ice-Fire combination idea consisted out of Mamoswine and Cyndaquil.

It was revealed that the reason for the name was due to her hair glittering (ピカピカ pikapika) after being shocked by the class pets in her kindergarten, Plusle and Minun. With her hair ruined, Kenny spread the word and soon she was teased by the nickname. Since her last win in the Daybreak Town, she has been training hard for the upcoming Grand Festival and has come up with many new combinations such as the Pachirisu/Mamoswine combo and the Buneary/Cyndaquil combo.

In Last Call — First Round! the Grand Festival begins. Except Kenny, all of Dawn's rivals including Dawn make it to the Battle Round. Dawn battled Ursula once again and after 5 minutes of intense battling Dawn defeats Ursula. After Ursula's defeat she admitted that she is weaker than Dawn.Dawn managed to reach the semi-finals of the Grand Festival. There, she found herself against to no other than Jessilina. In the end, Dawn won and advanced to the finals to face Zoey who has beaten Nando in the semi-finals.

Zoey and Dawn, they both showcase their skills as Top Coordinator; but as the time runs out, with only few points difference Zoey wins the title of Top Coordinator and the Sinnoh Ribbon Cup so she gets in the second place. She promises to her Pokémon that they will not stop trying until they reach the top.

Upon returning to Twinleaf Town, Johanna informs Dawn that Paris from Hearthome City wants Dawn to model Buneary and the outfits she designed. Although Dawn was originally going to leave with Ash and Brock to go to Kanto, she decides that she will remain in Sinnoh.

Ash, Iris and Cilan arrives at Cynthia's house waiting to see who's waiting for Ash. Once they come in Dawn sneaks behind Ash and pokes him, making him think someone's behind him. She's then introduced to Iris and Cilan and Ash tells Dawn about his new friend Meloetta. Dawn misunderstands what he's talking about and he decides to show her Ash's new Pokémon and Iris' and Cilan's as well. She introduces herself to them and brings out her own Pokémon, revealing her Cyndaquil evolved into Quilava which impresses Ash. Cilan decides to battle Dawn since Dawn is a coordinator and Cilan is a connoisseur. During the battle Dawn showed everyone her contest moves and Cilan gave his evaluation which confused Dawn and embarrassed Iris. After the battle they decide to relax for a while and they hear Meloetta sing its song. Team Rocket records the song and reports it to Prof. Segar as they make preparations for the future. In BW095, she left for the Johto region. 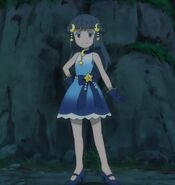