Fictional Characters Wiki
Register
Don't have an account?
Sign In
Advertisement
in: Tragic, Seekers of Vengeance, Neutral characters,
and 37 more

Dave was a contestant and one of the main protagonists of Total Drama Pahkitew island as a member of the Wâneyihtam Maskwak.

Due to seeing himself as the only "normal" person on the show, Dave can be critical of people and expects little of them. He is a logical thinker, albeit a little uptight, and is a compt freak and has an intense fear of germs and bacteria , and panicks everytime they are around. Dave is easily frustrated by his teammates, believing most of them to be crazy, and often belittles them. Despite his pessimism, he often means well and is generally being nice to most people as seen during the show when he had a lot of good moments with his friend shawn , or when he helped ella out of the water and treated her nicely. However, all this began to drastically change as the season progress. His affection for Sky has made him prone to anxiety over being separated or turned down by her, making Dave a lot more whiny, prone to mood swings and affecting his overall performance in the competition. By the finale, Dave's mental state turns for the worse after discovering that Sky already had a boyfriend, turning him vindictive and out for revenge against the girl he thought he could trust. He also seems to be very naive , as seen in the season’s finale. 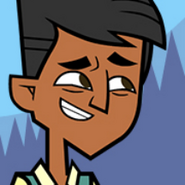 Also see him on