Darkwing Duck is a crime fighter, hero, and freelance agent of S.H.U.S.H. He fights crime with his sidekick Launchpad McQuack and some times with his daughter Gosalyn and her genius friend Honker Muddlefoot. Darkwing Duck's secret identity is that of Drake Mallard and lives at 537 Avian Way, St. Canard with Gosalyn and Launchpad.

Darkwing is portrayed to be a good crime fighter and hero at times hindered by his arrogance and ego. His competence varies from episode to episode but when he finally hits his stride and focuses, the cases are always solved. One example of this is his fight with Taurus Bulba. Darkwing Duck was forced to use all his energy and resources in order to stop him. When he defeated Taurus Bulba Darkwing was shown to be very heroic.

Darkwing's main weapon of choice in his crime-fighting escapades is his gas gun, which functions much like a grenade launcher. It fires grenades with a variety of different gases (smoke bombs, laughing gas, tear gas, etc.), as well as some more direct offensive weapons (including boxing gloves and cartoon bombs). It also has a retractable line and grappling hook for transportation purposes, and can fire other random objects that are loaded in its barrel. He invariably employs various other weapons and gadgets though many do not work as intended. His main forms of transportation are the Thunderquack (a small airplane-like vehicle shaped like Darkwing's head that was built by and is piloted by Launchpad) and his motorcycle, called the Ratcatcher (a name shared with an obscure Batman villain, maintaining the theme of superhero homages and parodies).

Despite a large degree of clumsiness, Darkwing is an expert in martial arts and generally quite proficient in physical combat; he employs several techniques he has developed on his own including the satirical but effective "double reverse, paddle drop, boom, boom kick" and his "patented flying web kick."

Darkwing often demonstrates a lack of common sense that is hampered by his tremendous ego. However, unlike Inspector Gadget and similar cartoon crimefighting archetypes, Darkwing is actually extraordinarily competent as a superhero - once he puts aside distractions and ego and focuses completely on the case. This moment of transition was marked by Darkwing's catchphrase "Let's get dangerous".

In some episodes, Darkwing is sent on missions as a freelance agent of S.H.U.S.H., a covert crime-fighting organization that deals with criminal activity that the normal authorities cannot handle, though he is not officially employed by them. Darkwing's S.H.U.S.H. missions most often have the aim of thwarting various evil schemes of the Fiendish Organization for World Larceny (or F.O.W.L.) and missions can be sent to him covertly via a messaging system called the Flashquack, which is a miniature Thunderquack.

While he is known (to an extent) as a hero in St. Canard, he frequently deals with citizens misunderstanding him. Numerous episodes bring up the fact that he's very unpopular, due to his intimidating tactics and dark appearance, to the point where the episode "Let's Get Respectable" was devoted to making him over as a more likable hero with nicer language, a brighter costume, and flower petals instead of smoke and gas. Once it interfered with the episode's case, however, the makeover quickly ended. In some episodes, people fail to recognize Darkwing, and at times, do not even know who "Darkwing Duck" is. This lack of popularity and recognition often clashes with his inflated ego.

Even though he is referred to as a "superhero" (by himself and other citizens), Darkwing has no true superpower. Instead, he relies on his weapons, finesse, and intellect to solve crimes and stop villains, much like Batman.

Darkwing Duck's main weapon is his trusty gas gun. His gas gun can also shoot a variety of items such as a grappling hook with line, and different gases such as smoke bombs, laughing gas, tear gas, etc.

Darkwing Duck also has an small airplane named the Thunderquack and a motorcycle called the Ratcatcher.

There are several completely different accounts given throughout the series regarding Darkwing's origins, including an alternate universe story called "Darkwing Doubloon"— all these stories contradict each other, which appears to be an ongoing gag.

Perhaps the most outrageous of Darkwing's purported origins is "The Secret Origins of Darkwing Duck", in which we learn that both Darkwing Duck and Negaduck both came from a doomed planet in a tale paralleling the origin of Superman. Darkwing acquired his mask, gas gun, and combat training from a variety of sources who figured that they "could come in handy some day". Among numerous other pop culture references in the episode, he receives martial arts training in a monastery inspired by David Carradine's Kung Fu. This episode takes place in the future and is told in a series of flashbacks by a museum janitor, who looks suspiciously like an aged Darkwing Duck, relating the story to two children who look like descendants of Honker and Gosalyn. Given the nature of the story - particularly since the narrator often seems to be uncertain of the story himself - and the revelation a few episodes later that Negaduck hailed from a parallel dimension, this episode is more than likely a tongue-in-cheek parody, not meant to be taken seriously. Even the title is a comic book reference, nodding towards the DC magazine Secret Origins, which chronicled the beginnings of DC heroes.

"Darkwing Doubloon" is a period episode taking place several centuries in the past (Darkwing himself says 300 years) and featuring the entire Fearsome Five and the Justice Ducks as pirates. The continuity problem posed by such an episode is rather glaring and absurd (for example, it is not explained how Bud Flud's ancestor came to be made of water, nor how Stegmutt's became a dinosaur), but the episode does not actually claim to portray the truth - merely a tale told by Darkwing of "another masked Mallard who fought for justice 300 years ago", which may or may not have some basis in real history. It is most likely an homage to alternate-version stories like DC's Elseworlds or Marvel's What If. Three of Darkwing's ancestors have appeared in the present day of the series, so the idea that Darkwing Doubloon is related to Darkwing Duck by blood is not impossible. This story of a remarkably similar ancestor fighting for justice in the days of the pirates parallels that of The Phantom.

The story which is most likely Darkwing's true origin is revealed in the episode "Clash Reunion," in which a young Drake Mallard disguises himself as Darkwing at his high school prom in order to stop a classmate turned villain (Elmo Sputterspark, later known as Megavolt), which is, in itself, a parody of the pre-Crisis Batman. This story is actually made plausible by two former students at Drake's reunion who want to watch Darkwing in action again.

The episode "Kung Fooled" revealed that Darkwing received martial arts training from the sensei Goose Lee, indicating at least part of the "Secret Origins" episode was based on a degree of truth. It is unclear whether Darkwing received his training before or after defeating Elmo Sputterspark. In various episodes, Darkwing makes passing references to skills he has learned from others around the world, giving his origin an additional Batman-like quality.

Several episodes show that Darkwing may have been inspired to become a hero before his battle in high school. In the episode "Paraducks", Darkwing and Gosalyn go back in time and meet the nerdy young Drake Mallard, who is a complete coward. He is about to be involved with a criminal gang, but Darkwing trains him to stand up to them, and in the end the young Drake dons a mask and helps Darkwing defeat the bad guys, taking on the identity of Darkwing Drakie. In this episode, Darkwing actually becomes an inspiration to himself, creating a time paradox.

Darkwing was also inspired, to some extent, by legendary S.H.U.S.H. agent Derek Blunt (an apparent parody of Ian Fleming) who wrote several thriller novels which appear to have greatly influenced the gadgetry aspect of Darkwing's superhero career. Darkwing once had the opportunity to work with Blunt and found him to be completely dissimilar to anything found in his fiction.

Some of these accounts seem intentionally over the top, and given Darkwing's ego problem, it is not hard to imagine that perhaps he exaggerates his true origins. As there is no one true story depicting how he came to be, most just shrug it off, saying that it adds to his character's mystique and charm. On the other hand, it has been argued that the unsure and convoluted origins of the character is a further nod to the superhero genre that the show repeatedly satirizes.

One episode ("A Star is Scorned"), in which Darkwing is almost replaced by Bushroot as the hero, shows that Darkwing and the other characters are actually actors employed by the Dizzy Studio. However, this episode ends with a short framing scene showing Drake and Gosalyn turning off the TV, indicating that all of the episode's previous events were merely part of a show that they were watching. In addition, a previous episode ("Twitching Channels") stated that a real-world TV producer discovered Darkwing's adventures through the use of a helmet; although the helmet was destroyed, it's possible that Darkwing and the others found some other way to maintain contact with the real world.

Darkwing is characterized by dramatic entrances; they usually involve mysteriously appearing in a cloud of smoke, and frequently include some version of the following speech (which is reminiscent of a well known Batman phrase: "I am vengeance, I am the night, I am Batman!"):

The metaphor in the middle line often consists of Darkwing comparing himself to something annoying, such as "I am the bubblegum that sticks in your hair", "I am the special news bulletin that interrupts your favorite show" or "I am the ingrown toenail on the foot of crime." Others tend to make very little sense, such as "I am the cat that lays kittens in your bed," (although having a litter of kittens in bed could be considered a nuisance). This middle metaphor often has something to do with the villain at hand; e.g. when facing Bushroot, he will often work plants into his metaphors.

Darkwing Duck's catchphrase "Let's get dangerous" originates from the second episode of the series, "Darkly Dawns the Duck Part 2". While chasing Taurus Bulba's airship, Darkwing Duck asks Launchpad to blow a hole in it:

The phrase is usually used whenever Darkwing starts to put aside distractions and follow through on a case.

Darkwing also has several other catchphrases he uses. Before Darkwing fires his gas gun at his adversaries, he often uses the catchphrase "Suck gas, evildoers!" Darkwing also often employs alliteration in his speech, e.g. "Clearly the crafty criminals committing the crime wave...", or "I'll find that supercilious sardine if I have to search all seven seas!"

Compulsive narcissist that he is, Darkwing often refers to himself in the third person, typically done as if narrating his own adventures. 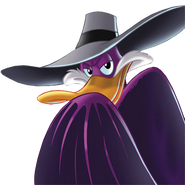