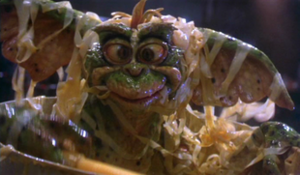 Daffy is one of the main mogwais and later one of the main Gremlins and one of the supporting antagonists (along with George and Lenny) in the film Gremlins 2: The New Batch. He is crazy and a completely nutty gremlin, even more so than anyone else of them. Daffy (a.k.a. the "The Crazy Gremlin") is a lighter shade of green than most gremlins, and a few thick yellow strands of "hair" that hang limply in the manner of the original incarnation of Daffy Duck. As a mogwai, his fur was mostly orange-brown in color, but also white and with black spot; he also had a loopy tuft of fur atop his head. His most recognizable features are his large, round eyes, which whirl constantly in a chaotic manner. He is hyperactive and has a mad sense of humor, and is constantly laughing hysterically.

He first appears when Gizmo got wet and is seen bouncing around until he hits a wall and uncurls, immediately beginning his crazy antics by throwing paint everywhere. He is taken back to Billy Peltzer and Kate Beringer's apartment, when Kate mistakes him for Gizmo (Daffy was the only one of the new batch who had color scheme similar to Gizmo, as the new batch were black and white as opposed to brown and white), Daffy causes a mess in the apartment, where Kate feeds him before midnight (remembering the most important rule), where Daffy was served mashed potatoes, a chicken leg, and corn. He liked to play with his food more than eating it, throwing most of the food on his plate at Kate. He is taken back to the Clamp Tower building by Billy while he tries to find the others before they feed, but he attacks a security guard and escapes (apparently eating the blood of the security guard after midnight or found some food later on).

He later reappears in a cooking show, now a Gremlin, and sits in a boiling pot of noodles while George and Lenny blow up a microwave, setting off a sprinkler system and spawning more Gremlins. He appears briefly dressed as a repairman messing about with the controls for an elevator which actually saved Kate from a bunch of Gremlins in the elevator. After not showing up for a while Daffy knocks out Billy who is in search for Gizmo, straps him to a chair and attempts to drill and pull his teeth out using dentistry equipment. Murray Futterman comes to Billy's rescue by fending off Daffy with a dentist light.

Daffy appears for one last time in the lobby with most of the other Gremlins, seen wearing Groucho glasses (fake nose and sunglasses) on the right hand side of the Brain Gremlin. 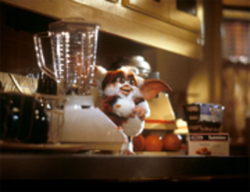 Daffy was Mogwai
Add a photo to this gallery

Retrieved from "https://characters.fandom.com/wiki/Daffy_(Gremlins)?oldid=78644"
Community content is available under CC-BY-SA unless otherwise noted.