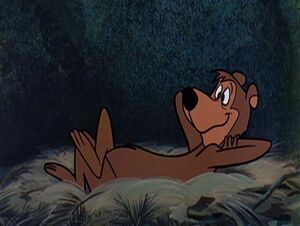 Corn Pone is the character of Hey There, It's Yogi Bear! played by Hal Smith.

Corn Pone appears in Yogi Bear's first full-length animated movie, he lying down Yogi's bed and He wakes up to see what happen, Yogi going to San Diego Zoo at California by Ranger Smith but Corn Pone is having a deal for Yogi to a having plan to Playing the trick Ranger Smith to go California and Now Yogi can stay in Jellystone Park, and the Truck arrives to pick him up Yogi waves to Corn Pone and Yogi off to the forest no one can find him this time.

Retrieved from "https://characters.fandom.com/wiki/Corn_Pone_(Hey_There,_It%27s_Yogi_Bear!)?oldid=85404"
Community content is available under CC-BY-SA unless otherwise noted.