Colonel Mustard is a gold muscular monster who is one of the members of the Tea Time Monsters. The monster first appeared in the Sesame Street episode "The Rainbow Show". In that appearance, he has a younger age. The adult age version of this monster debuted in The Furchester Hotel, which was an adapted version of one of the AM Monsters used for certain productions for Sesame Street. The monster is helpful on solving certain puzzles and other stuff that they have problems with the suitcase being stuck in the elevator. When Elmo is delivering the toast to Harvey P. Dull, he tried to run him over. The monster is played by Warrick Brownlow-Pike in the episodes.

A young version of Colonel Mustard. This version is voiced by David Rudman.

Sorbet overlapping Colonel Mustard and the other monsters. 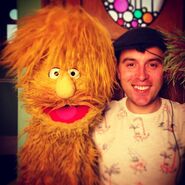 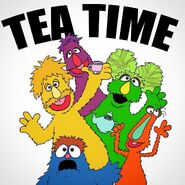 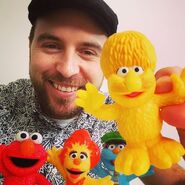 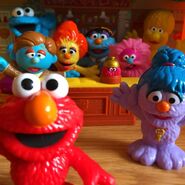