After Billy wakes up from another nightmare involving clowns, he is more terrified than ever towards them, so Mandy and Grim try to cure him of this phobia of clowns. First, Mandy asks Grim to bring to life a clown's head made on paper mache to entertain Billy, but the spell apparently does not work (though when Mandy and Grim left the room, the paper mache clown really did come to life and swallowed Milkshakes the cat alive). Then, they dress up as clowns in an attempt to look harmless. It somehow backfired as Billy ran in extreme terror and both Mandy and Grim chase him all over Endsville and finally to a local 1983-themed Kelly's Hail and Nail Salon where their attempts via circus performances to impress Billy have failed (though Grim wanted to do the circus routine with an umbrella but Mandy refused and made him juggled). This annoys Grim long enough as he furiously yells at the frightened Billy and repeatedly shakes him in order to make him stop being afraid of clowns. However, after consulting with his imaginary "Inner Frat Boy", Billy changes his feeling from being afraid to being angry at clowns, and attacks them with Grim's scythe. Mandy and Grim ditch the costumes by putting them on Irwin. As soon as Billy sees Irwin in the clown outfit, he (off-screen) attacks Irwin with the scythe. In the end, Billy is apparently cured of his fear, but then the paper mache clown attacks and eats them. 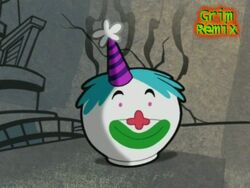 Retrieved from "https://characters.fandom.com/wiki/Clowns_(The_Grim_Adventures_of_Billy_%26_Mandy)?oldid=74272"
Community content is available under CC-BY-SA unless otherwise noted.