Fictional Characters Wiki
Register
Don't have an account?
Sign In
Advertisement
in: Yo Yogi! characters, Female, Bears,
and 10 more

Cindy Bear (voiced by Julie Bennett) is the beautiful and very sexy girlfriend of Yogi Bear. She speaks with a pronounced Southern accent and carries a parasol.

Cindy Bear originally appeared in the shorts "Acrobatty Bear", "A Wooin' Bruin" and the three-parter "Yogi's Birthday Party", where her fur was blue, but it was later changed to a light gray-beige to match that of Yogi (dark brown) and Boo Boo (light tan) in Hey There, It's Yogi Bear! in 1964. In this same film, Cindy sported a very light-blue skirt, and a very light-yellow scarf tied about her neck. She also wore a hat in the original 1961 cartoons, and in a few of her later appearances as well. In 2015 Yogi Bear 2 will be announced that Warner Bros. would film a 2nd live-action/animated film similar to Fox and Bagdasarian's Alvin & the Chipmunks. It stars Tom Cavanagh as Ranger Smith, T. J. Miller as Ranger Jones, Dan Aykroyd as the voice of Yogi Bear, Justin Timberlake as the voice of Boo Boo Bear and Amy Adams as the voice of Cindy Bear. It can be released on August 6, 2017.

In The New Yogi Bear Show, Cindy's mom is introduced, along with Cindy's niece, Bebe the Biker. It's also revealed that Cindy obviously comes from a rich Southern family of bears. In one scene of DreamWorks' Tom and Jerry, Cindy and her best friend, Kitty Jo (from Cattangooa Cats), live in the flight boat (similar to the airplane) and when the flight boat ran out of fuel, it fell off. The parachute deploys to save the flight boat from crashlanding in Tokyo.

Most fans have been waiting a long time for Yogi and Cindy to get married, but so far they haven't. In Hey, There, It's Yogi Bear! there's a scene where Cindy imanges the future which has them married, and they also have several kids. In the episode "Gossipy Which" of Yogi's Gang the which starts a rumor about Yogi being engaged to Cindy. For promotional use they made a image of Yogi and Cindy at their wedding.

Cindy Bear is the love-interest of Yogi Bear and a resident of Jellystone Park. She speaks with a pronounced Southern accent, and carries a parasol. Despite her beauty and sexiness, Cindy rarely engages in the same antics as Yogi and Boo-Boo and does not share the same antagonistic relationship with Ranger Smith. Her romance with Yogi Bear is typically portrayed as on-again/off-again, with her pursuing him while he avoids and evades her advances. Just as often, however, Yogi is shown to return her affections.[1]

Cindy Bear was originally designed by Ed Benedict. One early sketch saw her clad in bonnet, a frill scarf and an apron with an elongated, pointed muzzle.[2] A second sketch dropped all accessories save the frill scarf and shortened her muzzle.[3]

Cindy made her debut in the 1961 television series The Yogi Bear Show as a semi-recurring character. Her finalized animation design featured blue/grey fur, a hat, a white frill scarf and a necklace.[4]

Cindy appeared prominently in the 1964 feature film Hey There, It's Yogi Bear! in which she is kidnapped, spurring Yogi and Boo-Boo to come to her rescue. She was redesigned by art director Iwao Takamoto[5] for the film into the more familiar modern version with light brown fur and a yellow scarf.

Cindy has received a few slightly different, one-off redesigns. In Yogi's First Christmas, she was given dark brown fur and white hair, as well as a number of different outfits which she wore throughout the film.[6] She voiced by Janet Waldo. For the Spümcø short "Boo Boo Runs Wild", she retained her modern character design, but with the blue/grey fur of her original design.[7] She appears in the 2nd Yogi Bear movie feature voiced by singer/actor Amy Adams

From the time of the character's debut until 1988 in her last performance as Cindy in Yogi and the Invasion of the Space Bears. the character was voiced by Julie Bennett.

In Yogi's First Christmas the character is voiced by Janet Waldo.

In Yo Yogi! Cindy known as teenager is voiced by Kath Soucie.

In Boo Boo Runs Wild Cindy is retained her modern character design, but with the blue/grey fur of her original design voiced by Mary Ellen Thomas.

In the sequel Yogi Bear 2 the character is voiced by singer/actress Amy Adams. 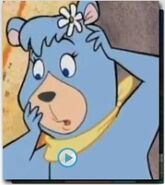 While only a recurring character in the animated shorts, Cindy Bear featured prominently in the various Yogi Bear and other Hanna-Barbera comics published by Dell Comics, Charlton Comics and Marvel Comics.

Cindy made her debut in Dell's Yogi Bear #5, detailing her back story. It is revealed that Ranger Smith had her transferred to Jellystone from Red Oak National Park in a scheme to hamper Yogi's mischief by distracting him with Cindy's persistent wooing. The plot eventually backfires when Yogi succumbs to Cindy's advances and begins stealing twice as many picnic baskets to feed her.[9]

She would also appear frequently in the Charlton Comics series, drawn in both her early design[10] and her revised design.[11]