Fictional Characters Wiki
Register
Don't have an account?
Sign In
Advertisement
in: Pages that are underlinked, Total Drama characters, Male,
and 30 more

Christopher "Chris" McLean, labeled The Host with the Most, is the overall main antagonist of the Total Drama franchise.

He has hosted almost every episode except for Basic Straining, Are We There Yeti?, Eat, Puke and Be Wary, and all the aftermaths other than The Aftermath: IV. He was arrested at the end of the fourth season for turning the island into a highly-contaminated toxic waste dump. However, he was paroled from prison and returned to host the following seasons.

Chris McLean is the primary host and the main antagonist of Total Drama. He is an overwhelming narcissist, with zero concern for the well-being of his contestants - and even sometimes best friend Chef Hatchet as well. Chris feeds off the pain of the teenagers, physical and emotional, and strives to keep the drama in Total Drama alive at all times. He appears to have gotten increasingly sadistic as the series has progressed, with the challenges turning from humiliating and occasionally dangerous, to being full-on life-threatening. While he continues to elaborate that it is for high-ratings, in later seasons it seems he is more concerned with causing pain than actually increasing the popularity with viewers. In The Final Wreck-ening, he excitedly explains that the challenge was so dangerous the network rejected the initial proposal - and he lied about shutting it down. However, in one instance, Chris does actually begin to worry that the contestants may die (but only because no competitors means no show, and no show means no paycheck to support his luxurious lifestyle). Despite the negative points of being a reality show host, Chris loves his job and the fame that comes with it. He has tried other activities like hosting a cooking show and being in a boy band, but all of them have been ill-fated. Chris is frequently seen in various costumes when introducing challenges, with Chef often dressed up as well to coordinate with him. He is highly rebellious against the network lawyers. On a few occasions, he has shown to be somewhat childish as well, whining when he is displeased about something.

While Chris was in Camp TV, he was never meant to appear; he was supposed to be the unseen host of the show. His name was mentioned in the promo when Geoff says "Yo, Chris, what's up? I love that guy." It's unknown if he was referring to the host or a fellow contestant, but it is most likely the host, as Gwen is the only known contestant (from the first generation) to have a changed name from her beta character model. 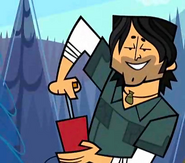