Become a superhero (succeeded)
Get revenge on Ladybug for forbidding her to be Queen Bee (failed)
To win her mother's love (succeeded)
Make her half-sister Zoé become a mean girl like herself (briefly succeeded, but ultimately failed)

"Ridiculous! Utterly ridiculous!"
Chloé Bourgeois, known as Queen Bee is one of the tritagonists and on & off anti-heroine-turned-major antagonist of Miraculous: Tales of Ladybug & Cat Noir.

In "Antibug", after Ladybug ignores her suggestions on how to beat Vanisher and calls her a liar, she is infected with an akuma by Hawk Moth and becomes Antibug, a supervillain that has the same outfit and the same abilities as Ladybug.

In "Style Queen", after Ladybug lost the Bee Miraculous that she wanted to entrust to Alya Césaire, Chloé found the Bee Miraculous and she, when the Miraculous was inhabited by Pollen, became Queen Bee (Queen B in the French version), a bee-themed superhero who helped Ladybug and Cat Noir "during particularly difficult missions" in the second season and season 3.

Later in "Queen Wasp", after a failed attempt at trying to impress her mother, Chloé is once again akumatized by Hawk Moth and becomes Queen Wasp, a wasp-themed villain. In "Mayura", during the fight with Scarlet Moth, Queen Bee is reakumatized into a scarlet version of Queen Wasp.

As of "Miraculer", Ladybug will no longer call upon Chloé to be Queen Bee due to the risk her identity being public knowledge places upon both Chloé and her family.

In "Heart Hunter", after being passed over too many times by Ladybug and at Hawk Moth's manipulations, Chloé gets akumatized into Miracle Queen, a villain who can control Miraculous holders where she is to set in motion for Hawk Moth's "elaborate mortal plan".

In "Miracle Queen", after being deakumatized by Ladybug and losing both her army of superheroes, the Miracle Box, and the Bee Miraculous, Chloé becomes bitter towards Ladybug and claims she will no longer be her fan and friend, being then expelled for good from the French Miraculous superhero team.

In "Queen Banana", after being removed from the movie Terrificator and having her half-sister be the main character, Chloé is akumatized and amokized by Shadow Moth into Queen Banana, a banana-themed supervillain and her emotions form the banana-themed gorilla sentimonster.

Chloé is a bossy, arrogant, and superficial girl who does everything in her power to crush and humiliate the other students, especially Marinette. She thinks highly of herself and lowly of others as she believes that she deserves everything and takes pride in her rich lifestyle. She believes that she is the most important person in the world and everyone adores her, but the real reason why she acts like this is because her father, the mayor of Paris, constantly spoils her by giving her everything she wants, while she felt unloved by her mother who was distant and kept forgetting Chloé's name.

If there is something that she wants, like attention or revenge, Chloé will do anything, including underhanded actions, to succeed. She steals Marinette's derby hat design to humiliate her and impress Adrien and Gabriel Agreste and threatens Mr. Damocles into punishing Alya Césaire by calling her father. Chloé rarely treats any of her peers respectfully, being acting bossy and overbearing to her best friend Sabrina Raincomprix and claims to her mother that she is just using the former. Her sour attitude comes across openly to whatever and whoever she despises, but she will sometimes pretend to be innocent and emotionally distressed to manipulate others in front of her father.

While being callous and careless to anyone but herself, Chloé could be cowardly, easily scared of danger often caused by akumatized villains, despite this changed through the series. Having helped caused some people to be akumatized, to her horror and confusion, she found herself their victim for revenge. Despite some of the villains calling her out for her nasty behavior, she disagreed with them, believing she was good. Chloé sometimes acts a little bit like a child or a daddy's girl. Her perceived childishness can also be observed through her affinity for roleplaying games with Sabrina, though could just as easily be a representation of her adoration for Ladybug.

Despite all of these traits, Chloé can be courageous as she is willingly helpful when asked by those she is close to or admires, such as helping Ladybug defeat the villain and asking help to the superheroine in order to save Adrien from her own akumatized mother. Like her mother, she has a fierce temper when angered. Chloé remains awful most of the time, but she shows a bit more kindness occasionally, expressing happiness when Ladybug is saving her or towards Sabrina. She also listens to advice at rare moments, like following Ladybug's suggestion to reconcile with Sabrina. If requested for a purpose, particularly by Adrien so that she can still be friends with him, she knows how to act congenial around others, although she often comes off as forced and can't keep it up for long.

On rare occasions, Chloé can be remorseful towards her actions, seen when she apologizes to Miss Bustier about forgetting her birthday and that her lashing out in anger caused trouble for everyone. After being deakumatized in "Queen Wasp", she sincerely apologizes to Ladybug and Cat Noir for selfishly using her superpowers and for what happened to Pollen because of her actions. In "Animaestro", her attempts to be a better person continued, finding out that Marinette had a crush on Adrien but decided not to tell because she thought it was a waste of time, with that being her way of being nice, proving that both Adrien's and Marinette's words left an imprint on her.

Ultimately, Chloé's abrasive and selfish attitude stems from a massive inferiority complex, born from the neglect her mother showed her as a child. As seen through their interactions, Audrey cares little for her daughter, even failing to remember her name on many occasions, and only gives attention to things that interest her. This has caused Chloé to try and emulate her mother's unpleasant behavior in a vain attempt to win her affection. Additionally, she often shows a lack of self-confidence behind her arrogance, feeling as though nothing she does has any real value no matter what she tries, even referring to herself as "useless" to Ladybug in “Malediktator”. Yet once she received the Bee Miraculous she finally began to feel as though she had true worth and value and after a few missteps showed a true desire to help those around her.

Also, in “Stormy Weather 2”, when she insulted Aurore and it led her to be akumatized, Chloé waited for Ladybug to give her the Bee Miraculous, showing she wanted to fix her mistake.

As Queen Bee, she is proud of her abilities and wanted to prove herself to her mother by causing a subway train to go at dangerous speeds to save it so the civilians will be grateful towards her. She didn't care about hiding her superhero identity in the process, revealing Pollen to the public and transforming in front of everyone. She wants to be a famous, well-known, and well-liked hero just like Ladybug, so she called Nadja Chamack to film her saving the said subway train. However, after a talk with Ladybug, she tearfully reveals that she is aware that no one in her class really likes her and feels useless. When given the Bee Miraculous by Ladybug, she heroically helps her defeat the titular villain and gives back the Miraculous without hesitation. Afterward, she slowly attempts to be a better person by cleaning up her own lair instead of having her butler do it. She was happy that everyone at school threw her a party in honor of her saving Paris.

Similar to Cat Noir, Queen Bee has a bit of a habit of leaping before she looks, meaning she is hasty or quick to act. This was seen when she quickly apologized to her father instead of listening to Ladybug's plan first and when she was eager to fight against Scarlet Moth's akumatized army.

However, in “Heart Hunter", Chloé had grown resentful toward Ladybug for being passed up too many times. When her parents were akumatized, she hoped that Ladybug would give her the Bee Miraculous so she could save them. Instead, she sees that Ladybug chose another heroine over her and grows very upset. Hawk Moth, who managed to steal the Miracle Box, gave Chloé the Bee Miraculous and used her anger to manipulate her into turning against Ladybug, all without akumatizing her.

In "Miracle Queen", after Ladybug deakumatizes her, takes back the Miracle Box and the Bee Miraculous, and expels her from the French superhero team, Chloé bitterly renounces her loyalty and friendship with Ladybug, officially becoming her enemy. And because of her attitude and possiblilty how she was raised, Chloé didn't fully understand a one of the main responsibilities about being a true hero is selflessness. By giving up her powers she was unknowingly protecting everyone including Pollen from their enemies. Through her actions, similar to Hawk Moth just as he used his family's love to cover his guilt, Chloé used those around her to cover up her desire for power and glory meaning she tried to take a shortcut to get the things she wanted.

As Antibug, most of Chloé's personality remains the same except that she is more vengeful towards Ladybug. She enjoys taunting her and Cat Noir about their teamwork, believing she is weak without him and Cat Noir is playing second fiddle.

As Queen Wasp, Chloé is prideful and arrogant towards Cat Noir and Ladybug, believing herself to be a more exceptional hero worthy of her mother's praise than both of them. She also wants to prove herself by taking away their Miraculouses and feels angry towards everyone who dislikes her and paralyzes them.

Throughout all the seasons so far, Chloe's trademark catch phrase is "Ridiculous. Utterly ridiculous" in a few various forms. If nothing goes her way or finds something totally absurd, that's when she'll use that phrase.

As a result, she found a hair comb known as the Bee Miraculous, which when worn grant Chloé the ability to transform into Queen Bee, her superhero alias.

As the former holder of a Miraculous, Chloé is assisted by a small yellow creature resembling a bee called Pollen, who is a magical being known as a kwami. As Queen Bee, Chloé's signature ability is subjection.

With the Bee Miraculous, she had the following abilities:

Hawk Moth first akumatized her to be a rival for Ladybug with these abilities:

Hawk Moth akumatized her Miraculous giving her the following abilities:

Miracle Queen is the most powerful akumatized form of Chloe, and a lot like her previous akumatization. After Hawk Moth akumatized her top, she regained her wasps, as well as these abilities: 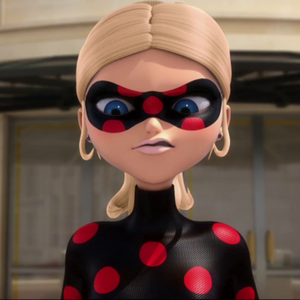 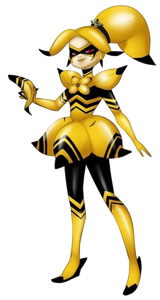