Chiaki Nagoya is the main characters of the Kamikaze Kaitou Jeanne series.

new student at Maron's school. He is the son of Kaiki Nagoya who owns the Nagoya Hospital and Mrs. Nagoya who dies when he was five. After Chiaki leaves home due to arguments with his father, he moves into Maron and Miyako's appartment building. Chiaki, like Maron, also has a secret. With the help of his own black angel, Access Time, Chiaki transforms into Kaitou Sinbad who happens to know of Jeanne's secret identity and is determined to beat her in the quest for demons and God's power.

Chiaki is a guy student at Maron's school, who can transform into "Kaito Sinbad" (怪盗 シンドバッド, Kaitō Shindobaddo?), Jeanne's rival, who also collects demons' powers. Maron doesn't realize Sinbad is really Chiaki, but he already knows of her double-identity. At the very beginning of the series, Chiaki moves into Maron's and Miyako's building and transfers to their class, in order to get close to Maron, to stop her from collecting the demons. At first, Chiaki is portrayed as a playboy, whom Maron despises. However, as time passes, he falls in love with her, and he's able to gain Maron's trust, and eventually love, by helping her out of tough situations, and helping her regain her courage--both as Chiaki and as Sinbad. After Chiaki catches Maron staring sadly at her empty mailbox, he begins dropping her "useless" notes, as one of Chiaki's many ways of trying to cheer her. Like Maron, Chiaki lives alone, having run away because he was tired of his father's continuing to marry new women after his mother's death. He later reconciles with his father, after introducing him to Maron. Chiaki, too, is accompanied by a small male angel, Access Time, who gave him the power to become Kaito Sinbad. It is eventually revealed that Chiaki had been attempting to stop Maron, because he knew of Finn's being an agent for The Devil, rather than for God, and was using Maron to help him. He had wanted to seduce her in order to make her stop, but he began to find himself blushing each time Maron smiled to him, which he tried to lie to himself by telling himself that it is just "false affection" (in the manga), or that he was being moody (in the anime). After Maron discovers he was also Kaito Sinbad, and that he was just trying to seduce her to make her stop being a Kaitou, he realizes his affection for her, and fights to regain her trust. In the final chapter of the manga, Chiaki indicated he was jealous of God, when he said God would "always be watching over Maron."

Chiaki is considered to be very attractive. Tall and lean built, Chiaki has brown eyes and blue hair. He is mostly commonly seen wearing his school uniform but when not in class, he is seen dressed in a clean casual style. Chiaki is good in sports which might be a reason for his lean form. He is strong but not overly built or muscular.

Maron Kusakabe : At first, Chiaki tries to get close to Maron to gain an advantage in their rivalry, but he starts to truly care for her, especially as he finds out more about her and her family history. He ends up marrying her in the manga, and they get together in the anime. 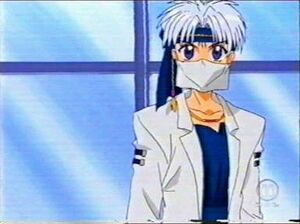 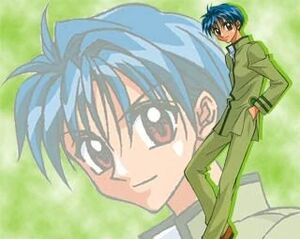 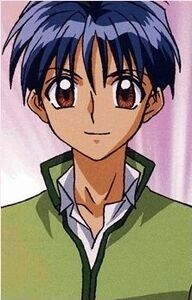 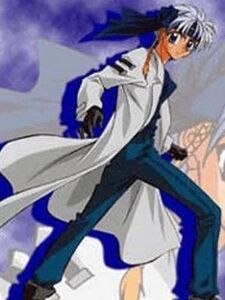