Fictional Characters Wiki
Register
Don't have an account?
Sign In
Advertisement
in: Pages that are underlinked, Total Drama characters, Chefs,
and 10 more

Chef Hatchet, labeled The Chef, is a deuteragonist/secondary antagonist of the Total Drama series. As implied, he is the chef of the show and is considered to be the show's co-host and a sidekick to Chris, appearing regularly throughout the series. Chef hosts the show in Basic Straining, Are We There Yeti?, a part of Mutiny on the Soundstage, Eat, Puke and Be Wary, and Zeek And Ye Shall Find. He is the only other major member of the staff besides Chris to be featured on the show.

Chef Hatchet is the psychotic sidekick of Total Drama host Chris McLean. He provides the meals for the contestants, disgusting slop which has been slammed by all but but a few competitors, but even they have complained about it at one point or another. However, some episodes have suggested that Chef actually does have exceptional kitchen skills. He will take over as primary host on rare occasions in which Chris is absent (or he tells him to). Given that both are equally unconcerned about the teenagers' well-being, it is hardly a far cry from the normal routine. Chef is bigger, louder, and much more confrontational and intimidating than his counterpart, who prefers a different outlet of striking fear into the contestants. He is frequently seen wearing ridiculous costumes, usually women's outfits, which garner teasing from everybody present. Although he and Chris are friends, they have had more than their share of negative interactions throughout the series. Chris's selfishness and neglect of the competitors will sometimes be duplicated in his treatment of Chef. Chef is not at all hesitant to call the other out and, in some instances, he has threatened or come close to leaving the show because of it. Chris is always extremely against this idea. Chef is multi-talented, having been seen doing many things skillfully while Chris introduces challenges. He has claimed to have fought in a war, though it is unknown which.

Chef is mopping the floor of the main lodge. As he is doing this, he's complaining about how his life has turned out. It's unknown whether or not this video was filmed by his own will seeing as how he spent the whole video complaining about his life instead of saying his positive qualities.

Chef did not appear, nor was mentioned at all during the promo of Total Drama Island's prototype series, Camp TV. However, he was shown to have a design vastly different from what he looks like in the Total Drama series. His wardrobe is similar, though his hat is different, appearing to be some kind of fedora rather than the chef's hat he is wearing in the current series. His angry face is much more exaggerated, yet at the same time he is much smaller in build. He also seemed to have a much larger mustache and also had a beard. Although he did not appear in the promo, some of his dishes did, such as the grub. 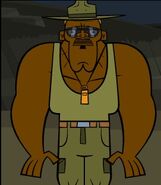