Her candles
Candlehead is a character from Wreck-It Ralph. She is one of the racers in Sugar Rush. She is voiced by Katie Lowes. She appears to be themed around birthday cake and ice cream.

Candlehead is one of the most cheerful of all the racers, and is also one of the kinder, if not somewhat ditzy. However, she will do whatever Taffyta tells her to do, even bullying Vanellope. Candlehead likes candles, most notably the one on her head, and is horrified when it is blown out. She is implied to be either weak-willed or unaccountable, as she attempts to blame Taffyta for her bullying Vanellope.

Candlehead is a pretty young girl with Chibi-like proportions. She has fair skin, a small nose, and large, green animesque eyes. Her hair is short and deep mint green in color, with front bangs and stubby pigtails tied in the back. One of her defining characteristics is her brown and pink cupcake beanie topped with a lit candle; the flame on the candle seems to react according to her mood. Candlehead additionally wears a shiny pink jacket and skirt over a brown striped shirt, matching brown leggings with pink polkadots, and black boots decorated with pink icing.

Concept art and other material suggests that Candlehead was originally named Minty Zaki, thought the name was given to a different racer, with her cake kart being a mint chocolate chip cake and ice cream theme. Her jacket was originally a minty green with chocolate chips in her hair. Somewhere in development the name was giving to a separate character and Candlehead gained her new name. 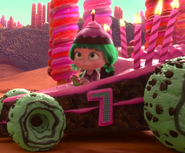 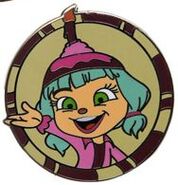 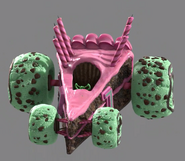 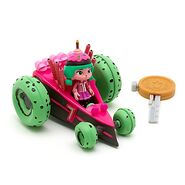 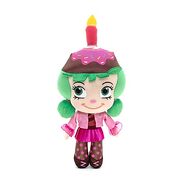 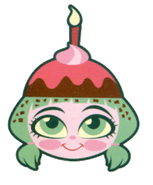 Retrieved from "https://characters.fandom.com/wiki/Candlehead?oldid=156786"
Community content is available under CC-BY-SA unless otherwise noted.