Regina George
Cady Heron is the 16 year old home schooled daughter of anthropologist parents who were previously doing research in Kenya. After one of her parents receives an high paying job back in America they decide that Cady needs to begin to acclimate herself socially with other girls her own age. So they send Cady to a Public High School. Completely unprepared for American teenager life Cady heads into the world of Queen Bees And Wannabees.

Cady enters public school as an outcast, and is taken under the wing of two fellow social outcasts: artsy Janis Ian and "too gay to function" Damien (last name unknown), whom she meets in her homeroom class (taught by Ms.Norbury). They show her the ropes of high school bagels and map out the various cliques, warning her to steer clear of The Plastics, an elite clique revered as "high school royalty." But as fate would have it, Cady does cross paths with this feared and envied superclique which consists of: queen bee Regina George , the most equally hated and loved girl in school, gossipy Gretchen Wieners, and Karen Smith ,who is considered the dumbest girl in school. 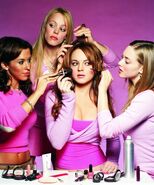 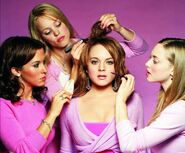