Start a Wiki
The Butcher 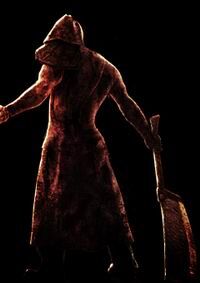 A monster known as The Butcher appears in Silent Hill: Origins as a major antagonist towards Travis Grady. The Butcher is a humanoid creature much like Pyramid Head in design, behavior, and function. He's a well-built humanoid with a butcher's apron, which is almost completely covered in blood. He also wears a series of metal plates that cover the left half of his face and left shoulder. His trademark weapon is a heavily oversized meat cleaver called the Great Cleaver. The other half of his face is fairly empty, save a deep hole where the ear would be on a human head, and it resembles that of Valtiel.

The Butcher behaves much like Pyramid Head does, with his frequent slaughtering of various monsters. However, unlike Pyramid Head, the Butcher does not emulate any sexual acts on his victims. Also, whereas Pyramid Head's movement is very jerky and almost twitchy in nature, the Butcher's movements are always fluid and controlled, giving him a much more calm and focused appearance than the other "Bogeyman"-type monster.

Travis' encounters with The Butcher

Travis meets the Butcher several times throughout his journey to Silent Hill, each encounter occurring in the "normal" version of town. The first encounter occurs when Travis finds him in the back hallway of the butcher shop, where he lifts a trembling Faceless Nurse by the neck before stabbing her in the belly with his cleaver, cutting downward between her legs before dropping her and skulking away. While in the maintenance tunnel in the Riverside Motel, Travis can look through a peephole into room 503, a room he was standing in only moments ago, in which he will see the Butcher standing next to the bed. But if he looks again, the monster will have disappeared. Coincidentally, the room the Butcher is in is filled with both photography and anatomy artwork of the Butcher and other monsters.

In their second encounter, Travis meets the Butcher in the Riverside Motel's kitchen, where he is slowly slaughtering a Two-Back creature. Battle quickly ensues after this encounter, where Travis is forced to kill it. As the Butcher bleeds out on the floor, Travis picks up the Great Cleaver, considers for a moment and then slams it into the creature's back, finishing it.

The Butcher's cleaver is similar to Pyramid Head's Great Knife, because it is heavy and therefore is dragged along the ground, making a screeching sound. Because of this the Butcher can be heard somewhere near the Lumberyard, as Travis travels to the theater, making it possible to believe that the Butcher is just a few steps ahead of Travis. Fortunately, there is no encounter with him at this point.

The Butcher attacks with his cleaver, constantly marching towards Travis with murderous intent. The table in the middle of the battle room leaves little room to maneuver, but makes it easier to run away from him. Despite the fact that Travis runs faster than the Butcher, the monster is still quicker than most creatures, and can close distance on him surprisingly quick if Travis isn't careful. The Butcher also swings with surprising speed and does a great deal of damage, making melee confrontation inadvisable at best. Firearms are the best way to take him down, specifically the shotgun.

The Butcher represents cruelty and sacrifice, particularly that of the Order. His calm, emotionless torturing and slaughtering of other monsters rings of the Order's tendency to murder and sacrifice human life for their worship. The Butcher also represents Travis's inner rage and sexual frustrations, and so is involved heavily in the Bad Ending. There are some that speculate that the Butcher may actually be Travis himself, as implied by the various voices heard during the Bad Ending, as well as by the description of the Butcher accolade. The helmet that covers half of it's head can possibly symbolize split personality. His method of killing involves slicing through the reproductive organs of his victims, representing his anger associated with represses sexuality.

Retrieved from "https://characters.fandom.com/wiki/Butcher_(Silent_Hill)?oldid=117157"
Community content is available under CC-BY-SA unless otherwise noted.