Bug-Lady is a strong, sturdy and quite voluptuous villainess who wears an extremely skintight armor-suit that makes her look insect-like. Including small features: Compound eyes, thick eyelashes and marks on the suit.

She is feisty and often wary to not be killed by the heros.

Bug-Lady was one of the many new Vicious Circle members that were brought into the group during the reign of Buster Justice. She was one of the villains sent to abduct Dragon’s children as a way of trying to get the hero to quit the Chicago Police Department. She then attacked Dragon when he was recovering in Hillman Hospital after the initial encounter with the man who would become Virus.

When OverLord III sent an army of Vicious Circle villains to Hillman Hospital to steal the last remaining vial of Dragon’s blood, Bug-Lady was present. Bug-Lady is taken out by Malcolm and Angel as they commence their search for their father’s stolen blood. Malcolm pins down the villainess and demands to know the location of the blood, threatening to break her arm unless she offers up some answers. Bug-Lady refuses to cooperate and Angel watches on, trying to get her brother to calm down. Malcolm grows frustrated and simply knocks out his prisoner and vows to keep trying to save his father.

The unconscious bug-Lady is delivered to the Chicago Police Department where Captain Stewart points out that the super-powered kids cannot go around beating up the bad guys as there is a proper procedure to adhere to. Angel suggests that they visit with Rex Dexter to get him to create a device to locate Dragon’s blood. She makes a phone call to Mildred Darling to update her whilst Malcolm begins to get carried away with excitement over Dragon’s possible resurrection.

She is next seen when Dart II berates the VC for not finding Malcolm. She is part of the search party sent after Malcolm, but quickly flees after seeing her allies brutally murdered and beaten by Malcolm. 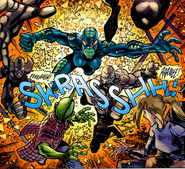 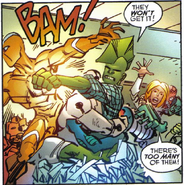 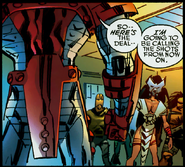 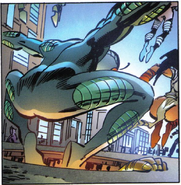 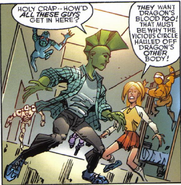 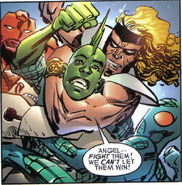 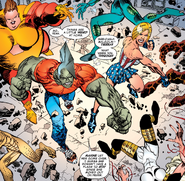 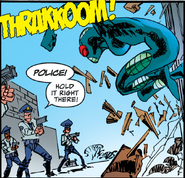 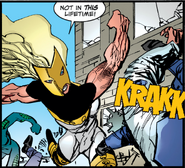 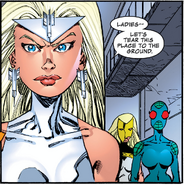 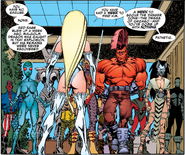 Add a photo to this gallery
Retrieved from "https://characters.fandom.com/wiki/Bug-Lady_(Savage_Dragon)?oldid=140848"
Community content is available under CC-BY-SA unless otherwise noted.