Song of the South

Chased away by Bees

"I'm gonna SKIN ya."
Br'er Fox is the primary villain in the animated sequences of the 1946 Walt Disney-produced film Song of the South. The character was voiced by actor James Baskett, who also portrayed the live-action character Uncle Remus. In contrast to the Br'er Fox in the earlier illustrations of Frederick S. Church, A. B. Frost, and E. W. Kemble, the Disney animators depict the character in a more slapstick, cartoony style.

Br'er Fox is the archenemy of Br'er Rabbit both in the cartoon and the stories, though he is always outsmarted by the rabbit - he is sometimes aided by his brutish assistant - Br'er Bear.

Br'er Fox is by far the brains of the duo but is also a hyperactive and crazed individual who is obsessed with capturing Br'er Rabbit and roasting him alive - when not trying to eat the Rabbit Br'er Fox is content with trying to cause misery for him instead: he is a violent and sadistic individual as can be seen by his threat to hang Rabbit, skin Rabbit alive and his failed attempt at causing Rabbit harm by tossing him into a briar patch (Br'er Rabbit happily declared "I was born and raised in a briar patch!" when this deed is committed, being small and nimble enough to avoid the thorns - much to Br'er Fox's dismay).

Br'er Fox is not as easily tricked as Br'er Bear but often has little choice but to go along with Br'er Rabbit's tricks anyway as Br'er Bear's temper means he often forces Br'er Fox to do something even when he knows its going to lead to trouble (such as when Br'er Bear was determined to find Rabbit's "laughing place" - which Fox knew didn't exist, yet Fox could do little but go along with it as Br'er Bear threatened to beat him up if he didn't).

Br'er Fox and Br'er Bear - along with Br'er Rabbit share a common title, which is a term for "brother" and was an especially prominent form of address in the Uncle Remus stories.

Br'er Fox lived in an underground burrow (possibly a cave since Br'er Bear also resided there) atop a gloomy hill that was barren - in contrast to the colorful world the rest of the animated sequences took place in. 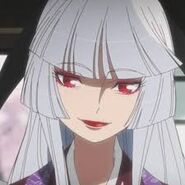 Br'er Fox in The Adventures of Brer Rabbit