Fictional Characters Wiki
Register
Don't have an account?
Sign In
Advertisement
in: Pages that are underlinked, Film characters, Pixar characters,
and 9 more

Bomb Voyage is a minor antagonist from the Disney/Pixar film The Incredibles. He was a 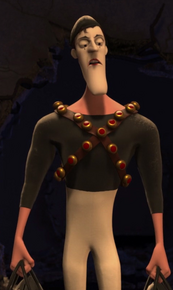 Bomb Voyage is a recurring enemy of Mr. Incredible as he is introduced. He is a mime-like criminal who speaks French, although it was hinted that he knew English as well.

Bomb Voyage successfully made a getaway, and it is presumed that he remained at large for the remainder of the film. He was also partially responsible for the Anti-Super Legislation Act being enacted, as the bomb he placed on Buddy Pine was later dislodged from his cape due to Mr. Incredible and managed to land and detonate on a railroad track, which forced Mr. Incredible to stand in the path of the train to prevent it from going through the newly made hole in the tracks, which resulted in the passengers suing Mr. Incredible, and acting as the jury in his lawsuit trial, that eventually led to it being passed.

It is unknown what became of him afterwards, and he is presumably at large.

In the video game version, Voyage is the main villain for the first three levels of the game and he speaks English. In the last level he is involved in, he recreates the scene in the movie, throwing a bomb in Buddy Pine's cape, forcing Mr. Incredible to save him. After this, he attempts to escape in a helicopter, and Mr. Incredible defeats him by throwing six bombs at him, causing it to fly out of control and presumably crash, killing Voyage.

The Incredibles: The Comic Book

In the comic series, Bomb Voyage is recruited by Xerek to make the Eiffel Tower vanish with one of his bombs, and later meets Elastigirl and Mirage in person when they arrive to investigate, when he attempts to escape, Elastigirl follows him throughout Paris and eventually shakes Xerek's location out of him. Since it has been 15 years since his appearance in the movie, Bomb Voyage has aged significantly, with a potbelly and balding hair.