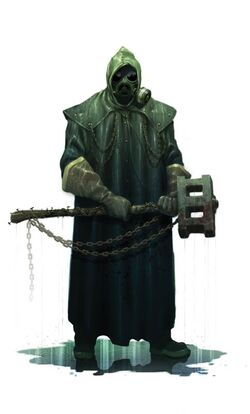 The Bogeyman is a monster who appears in Silent Hill: Downpour. He is Murphy Pendleton's own personal manifestation, making him equivalent to Pyramid Head or the Butcher, and is named after the folkloric Bogeyman. Murphy encounters him several times throughout his trek through Silent Hill, menacing him and others. The Bogeyman can also be seen by Anne Cunningham, who also must contend with the Bogeyman. He wields the Great Hammer and follows Murphy and Anne relentlessly.

The Bogeyman shares its name with the Homecoming version of Pyramid Head. Although their names are the same, any further similarities are minuscule.

The Bogeyman appears as a massive humanoid, towering over every other humanoid in the game. His huge frame is housed in a heavy black raincoat, with his face completely obscured by a gas mask, which is reminiscent of toxic radiation suits. He also wears heavy rubber boots and thick rubber gloves. The Bogeyman's coat has several chains, studs, and stitches adorning it. Interestingly, he doesn't have any immediately recognizable deformities or torture implements in his appearance—at least none that can be seen with his obscuring coat. The Bogeyman's signature weapon is a massive sledgehammer, which appears to be made from a cinder block at the end of a long metal pipe.

The Bogeyman's behavior is that of pure menace, plodding around with his massive hammer and intimidating stature. His movements are slow and deliberate, yet always conveying a kind of ruthless brutality. He is also shown to be a relentless murderer, going so far as to snap a child's neck with one hand, making a "hush" gesture towards the horrified Murphy. The Bogeyman's raw strength is also impressive, able to lift a grown man with one hand and fling him across the room. This strength is even more dangerous with his sledgehammer in hand, as he is able to outright kill even the toughest monsters with one slow but mighty swing. He is also able to send out strangely accurate shockwaves that travel great distances, as well as destroy surrounding architecture.

The Bogeyman is first directly seen during one of the Centennial Building Otherworld's Void chase scenes, walking down a hallway that is also Murphy's only escape route. The Bogeyman turns to glance at him just in time for the floor to collapse and Murphy to plummet to another part of the Otherworld. The Bogeyman's bellowing cry is also heard several times throughout the exploration of both the Otherworld and the Fog World, usually accompanied by a tremor.

Murphy comes face-to-face with this creature once again after collecting a poem to ward off "the Bogeyman" as specified by a young boy resembling Murphy's son Charlie. The boy seems oblivious to the titan as Murphy struggles to recite the poem from memory, having to stop to scream profanity at the Bogeyman as his memory fails him. The Bogeyman lifts the boy up, watching Murphy closely, as if waiting for him to finish the poem, but snaps the boy's neck with one hand before the last verses could be said, making a "shhh" gesture with his hand before walking away.

The Bogeyman is seen several times throughout the Orphanage's Otherworld sequence, destroying the environment as Murphy gives chase to an unnamed girl to protect her from the masked giant. Despite the Bogeyman confronting Murphy several times to impede his progress, Murphy awakes from the Otherworld in the chapel morgue. The nun there asks Murphy to sign for his son's dead body, to which Murphy claims he buried Charlie years ago. The nun yanks the sheet off the huge mass, revealing a seemingly comatose Bogeyman with the keys to DJ Ricks' boat, "Freedom" on a chain around his neck. Murphy has a breakdown, admitting to having screwed up badly, before finally trying to take the keys. The Bogeyman springs to life, grabbing Murphy and hurling across the room, causing him to awake in what seems to be his old house.

Murphy hears Charlie's cries for help before running down to the lake shore, only to find the Bogeyman rising out of the water. A brief confrontation occurs, Murphy finally staggering the giant and smashing his head in with his own sledgehammer. Murphy awakes back in the morgue, the Bogeyman's mask now gone, revealing a face that switches Murphy and Napier's likenesses between light flickers. Murphy laments his son's death, but a vision of Charlie congratulates him on his defeat of the Bogeyman and tells him not to blame himself for his death.

Murphy himself never sees the Bogeyman again, but during a confrontation with Anne it is revealed that she sees Murphy as a human-sized version of the raincoat-clad killer. During the conversation Anne shoots Murphy in the shoulder, apparently causing him to black out. The player than gains control of the once-again gigantic Bogeyman, who has abandoned all likenesses of Murphy's personality. During the fight he tries to defeat Anne, who maintains a steady stream of pistol fire and opens the nearby cells, releasing some Prisoner Juggernauts to aid her, though they each die with one swing from his hammer. One ending is obtained if the player lets Anne defeat the Bogeyman, which requires a degree of passivity on the player's part due to the Bogeyman's massive quantities of health.

Should the Bogeyman defeat Anne however, he hoists his sledge up for the killing blow, and the player has one last choice: whether to kill or spare Anne, which then directly affects the ending received.

Unlike Pyramid Head and the Butcher, the Bogeyman does not represent the desire to be judged, instead manifesting itself as the desire to judge others, namely those responsible for Anne's father and Murphy's son's deaths.

As such, the Bogeyman is literally just that—a ruthless monster—in the eyes of those who see him. He is the embodiment of what is known in social psychology as the "fundamental attribution error." To Murphy, the Bogeyman is Napier, but at other times, the Bogeyman appears to be Murphy.

Its presence is due to a character's lack of personal accountability and short-sightedness. The Bogeyman is an illusion created from the perceptions of the individual to rationalize his or her own crimes and misdeeds by placing the blame on the "Bogeyman" rather than themselves. When Murphy realizes that his actions made him a "Bogeyman" as well, he is able to take accountability for himself and defeat his version of the Bogeyman, retrieving the "freedom" key in the process. This is evidenced by the final stanza of the Bogeyman nursery rhyme: "Take heed, its not too late. Mistakes needn't haunt you forever. Though you have regret, you can't just forget. You alone decide your fate."

He also could represent destruction brought about by revenge, as the relentless pursuit of vengeance can become just as destructive to oneself as that which caused the revenge-seeking behavior in the first place:

Poor little Steven Skelter
Even the chaplain won't forgive you.
Forever lies, your pleading cries
But Suzy knows you felt her.
Nowhere left for you to run,
Every fault laid bare in the open.
Along with your skin, splayed out from within,
Once the monster has his fun.
Take heed, it's not too late,
Mistakes needn't haunt you forever.
Though you have regret, you can't just forget,
You alone decide your fate.

Retrieved from "https://characters.fandom.com/wiki/Bogeyman_(Silent_Hill)?oldid=43218"
Community content is available under CC-BY-SA unless otherwise noted.