Princess
Guardian of the Sol Emeralds

To protect her kingdom

Heights, Doctor Eggman Nega, Doctor Eggman, people who look at the Sol Emeralds the wrong way, anyone who teases her about her powers, being referred to by her official titles, Marine (formerly), anyone who threatens her kingdom, Johnny, Captain Whisker, Iblis, relying on others

Pyrokinesis
Sensing the Sol Emeralds
Super speed
Hyper-go-on usage
Levitation
Harnessing Sol Energy
Blaze the Cat (ブレイズ・ザ・キャット Bureizu za Kyatto?) is a fictional character from the Sonic the Hedgehog series. She is an anthropomorphic, fourteen-year-old, lavender cat and is a princess hailing from an alternate dimension, where she is both the regent of her world and the appointed guardian of the Sol Emeralds, a role similar to that of Sonic and Knuckles combined. She is gifted with the power of pyrokinesis, which lets her create and manipulate fire in any way she pleases.

Blaze is normally calm, elegant and level-headed, but tends to conceal her true feelings. Devoted to her position, she sometimes gets herself bogged down by her own self-imposed strict discipline, which made her anti-social, withdrawn, and initially unfamiliar to the concept of having friends. After spending time with Sonic, however, Blaze was able to discover the true meaning of friendship, allowing her to accomplish tasks for the good of her people and the innocent which she could never do alone.

Blaze was designed as a character who was equivalent yet an alternate version of Sonic's character. An undated concept of Blaze which was very similar to her final design except her eyes were rounder and her ponytail was turned front instead of back, she was supposed to wear clothing similar to the Arabs, since she was wearing a shalwar and a mid-riff top.

According to the early character spread sheet files of Sonic the Hedgehog (2006) it is mentioned that Blaze wears a cape to hide her flames because she was teased. However this "cape" concept has not been shown clearly in games whether her purple outfit is the cape. This was later clarified by the concept artwork gallery in the Nintendo 3DS version of Sonic Generations where one of the pictures showed Blaze wearing a white and pink laced cape. One of the Sonic Channel 2013 2-D images shows her wearing a purple cape.

An ex-member of SEGA on Sonic Wrecks released concept art of Blaze which was said to be done in early 2005 in PowerPoint documents. Her design was very similar to that of Shadow's however it is possible the character was in a mere silhouette form.

Blaze is normally calm, solemn and level-headed, but tends to conceal her true feelings. She is often described as elegant, which is demonstrated through her body movements and her ballerina-like fighting style. Being royalty, Blaze is quite mannerly and typically maintains a relatively quiet, stoic and formal air among others. She tends to have body language less casual than most others, such as in Sonic Generations where she stands straight and tight rather than relaxed like the rest of the cast. She also usually speaks in a polite and lady-like tone. Despite being honored of her royalty though, Blaze is down-to-Earth and dislikes being called by her title.

While Blaze gives the impression that she keeps her emotions in check, she is inwardly highly emotional and possesses a fiery temper, and when she loses her composure she is quite frightening, aggressive, harsh and prone to bad decisions. She is very serious and devoted to her position as princess and guardian of theSol Emeralds, even initially suspecting anyone even looking at the Emeralds the wrong way, which is motivated by her own genuine concern for others' safety. She is usually highly disciplined and focused, never allowing herself to not lose focus, and can be quite stubborn and impatient once she has put her mind to something. When dealing with enemies, she never holds back her strength and is not above the idea of using lethal force. Because of her own self-imposed strict discipline though, she is often tense and frequently suffers from great self-pressure.

Initially, Blaze held a personal dislike of her pyrokinesis because it left her to bear her responsibilities alone, which made her see her flames as a curse. She later learns to accept her powers from Sonic's advice and came to see them as a blessing.

Because of her past and her devotion to her duty, Blaze developed a habit of doing her tasks alone which led her to build up walls between her and other people, making her anti-social, withdrawn and introverted. As a result, she ended up building up her own secret feelings, leaving her with an inner turmoil. She therefore lacks in social skills, finds it hard to open up and talk to people, and comes off as shy. She would also be wary and curt towards strangers and frequently reject offers to help, even become defensive and angry when help was offered. This attitude also made her somewhat selfish as she berate Sonic despite him offering help and eventually ended up fighting him.

After interacting with Sonic, Cream and their friends, Blaze developed much more socially, making her more amiable, friendly and gentle towards others. She also came to understand the true meaning of friendship, making her willing to trust and accept help from others. While she still prefers handling things on her own and remains somewhat reclusive, she will accept her friends' help and is genuine grateful for their aid. At the time of Sonic Generations, she is seemingly much more sociable, participating in a party simply for the sake of friendship and is much quicker to open up and relax in front of her friends.

Blaze is very honest and almost blunt when dealing with annoyances such as Marine, even outright telling her that she is a nuisance. She also had a tendency of judging others poorly in Sonic Rush, making her somewhat overconfident and arrogant.

Blaze suffers from acrophobia and just the sight of heights makes her terrified, nervous and uncomfortable as seen in Sky Babylon. However, she is not much for admitting her fear and will try to hide it. 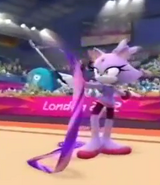