Fictional Characters Wiki
Register
Don't have an account?
Sign In
Advertisement
in: Pages that are underlinked, Total Drama characters, Divas,
and 7 more

Mildred "Blaineley" Stacey Andrews O'Halloran is a television host, formerly of Celebrity Manhunt, and later Total Drama World Tour Aftermath. She was one of the three newcomers to the series in Total Drama World Tour by accidentally winning the "second-chance" challenge in Aftermath Aftermayhem, and became a contestant on the season after debuting in Niagara Brawls. She also makes a cameo appearance in a Total Drama All-Stars exclusive clip.

Blaineley is obsessed with gossip and fame. She will do anything to obtain a "juicy" story and doesn't hold any interest in topics that couldn't start a scandal. While hosting Celebrity Manhunt, Blaineley seems friendly enough, albeit impatient. However, her actual personality is shown when she transfers to the Total Drama Aftermath show. She is conceited, mean, and it doesn't take long for the contestants to take a disliking to her. As seen in Niagara Brawls, she will fake sadness if it means earning more fans. Given that she was the original choice to host Total Drama above Chris, she is apparently considered very good at what she does. Blaineley has many disgusting secrets which contrast immensely to her public image; even her name is fake. 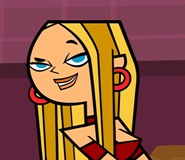