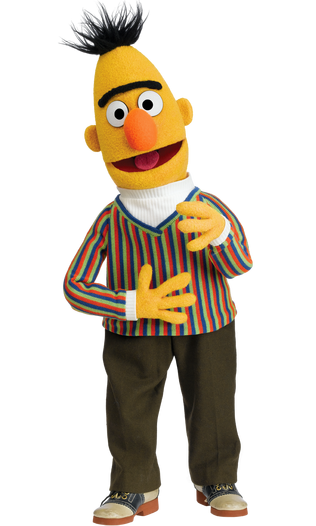 In contrast to the practical-joking, extroverted Ernie, Bert is serious, studious, and tries to make sense of his friend's actions . His own passions include reading Boring Stories, collecting paper clips and bottle caps (especially the rare Figgy Fizz), consuming oatmeal, and studying pigeons. While Ernie's best companion outside of Bert is Rubber Duckie, Bert has his pet pigeon, Bernice. True to his detail-oriented, organized mind, Bert is president of the National Association of W Lovers. Unfortunately for Bert, his nose has come off of his face on a number of occasions. He has a distinctive, bleating laugh.

The Andventures Of Elmo In Grouchland End Credits 1999

While Ernie has appeared in many of scenes without Bert, Bert has not been seen without Ernie quite so often. Notable exceptions include the songs "Doin' the Pigeon," "The Subway," "Bert's Blanket," and "Stick Out Your Hand and Say Hello" with Rick Moranis, as well as occasional Muppet/Kid scenes, such as discussing emotions with John John.

Some of Bert's memorable moments include riding with Ernie in a plane in Follow That Bird, and interrupting The Adventures of Elmo in Grouchland whenever it looked like the film was becoming unsettling.

Bert and Ernie were the only Muppets to appear in the Sesame Street Pilot Episodes, and they also hosted This Way to Sesame Street, a special sneak preview special promoting Sesame Street.

Play With Me Sesame

Bert was one of the hosts of Play With Me Sesame. On that show, he often played games on a computer, such as "Pigeon Patterns" and "Perfect Pairs" (the latter of which involved matching socks). He also showcased "oatmeal art" from kids.

In Christmas Eve on Sesame Street, Bert decided to give Ernie a soap dish for Christmas so that his Rubber Duckie would stop falling into the bottom of the bathtub. However, as he had no money, he made a trade at Hooper's Store, where he traded his paper clips for a soap dish. At the same time, Ernie decided to give Bert a cigar box to put his paper clips in, and traded his rubber duckie in order to get one. However, Mr. Hooper could see that neither of them was happy with trading their things, so he gave them their things back on Christmas Eve.

In The Muppets: A Celebration of 30 Years, Bert and Ernie introduced clips from Sesame Street.

In A Muppet Family Christmas, Ernie narrated a Christmas pageant, 'Twas the Night Before Christmas, and got Bert to play Mama. They also conversed with Doc.

Bert served as director in Elmopalooza.

Bert made an appearance in Elmo's World in The Street We Live On, wondering how he could get out of Elmo's World.