Balto is the titular main protagonist of the animated film series Balto. He is a husky/wolf hybrid from Nome, Alaska and is loosely based on the real-life sled dog of the same name. He is the love interest (and eventually husband/mate) of Jenna, and the father of Aleu, Kodi, Dingo, and Saba.

He's voiced by Kevin Bacon in the first movie, and Maurice LaMarche in the second and third films. 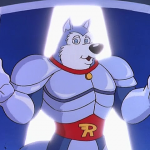