Balthazar Bratt is the main antagonist of Illumination's 8th animated feature Despicable Me 3. He is a former child star turned supervillain and the arch-enemy of Felonious Gru.

As a child Bratt was an adorable child of small stature and wore a purple suit jacket with shoulder pads and a white shirt underneath, he also wore purple parachute pants and black and white shoes. He also had a thick head of black medium length hair styled into a mullet.

In the present day Bratt is a handsome, tall and slim, athletic built man with fair skin. He now has a black moustache and his hair is a bit longer but also has one bald spot. He wears an updated version of his original outfit but added several hidden features into his clothes such as his shoes turning into water skis and his outfit turning into a paraglider. He also has one gold earring and is seen holding his Key-Tar lot, he is also mostly seen blowing a bubble out of bubble gum which he did frequently on the show as well. 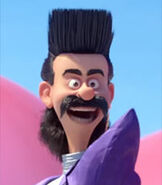 Add a photo to this gallery
Retrieved from "https://characters.fandom.com/wiki/Balthazar_Bratt?oldid=169751"
Community content is available under CC-BY-SA unless otherwise noted.