Fictional Characters Wiki
Register
Don't have an account?
Sign In
Advertisement
in: Pages that are underlinked, Antagonists, Digimon characters,
and 2 more

'Welcome to my parlor,' said the spider to the fly. „~ Arukenimon, through the Digimon Analyzer Arukenimon is a villainess in Digimon Adventure 02 and one of Oikawa's two henchmen.Contents [show] AppearanceArukenimon is an Ultimate Level Digimon that is drider-like. She poses as a human woman with odd red and purple clothing and large shades concealing her gold-tinted eyes.Digimon Adventure 02Arukenimon is a Digimon created by Yukio Oikawa when he spliced his DNA with data, creating one of two Digimon hybrids to serve as his eyes and ears in the Digital World when he plotted a means to enter the other world through the Control Spires. Arukenimon made her first appearance in the storyline after Ken Ichijouji sheds his Digimon Emperor personality. Appearing in her human form, confusing the DigiDestined on how an adult is in the Digital World, Arukenimon started causing terror with the artficial Digimon she creates from the Control Spires. But when the DigiDestined break her hold over Giga House's resident insect Digimon she was using on them, Arukenimon reveals her true form and puts up a fight with the Digidestined and their Digimon before being defeated by Paildramon in a very undignified way. Through saved by her partner Mummymon, Arukenimon vowed revenge and attempted to get it with the creation of BlackWarGreymon. However, when BlackWarGreymon is revealed to have a will of his own, Arukenimon takes Mummymon's suggestion to focus their attack on the Destiny Stones.But on BlackWarGreymon destroys the first of the seven stones, Arukenimon resolves to hinder the DigiDestineds' attempt to stop him before they managed to save the last stone and Azulongmon convinces BlackWarGreymon to find his own path. Later on, during the Christmas holiday, Arukenimon opens numerous Digi Gates to keep the DigiDestined occupied worldwide while Mummymon lured twenty children to Oikawa to implant copies of Ken's Dark Spore into during the attack of the Daemon Corps. After this, despite Black WarGreymon entering the real world, Oikawa and his followers go into hiding until the time for the Dark Spores comes. Though learning of her origins, Arukenimon focuses her achieving her creator's goals. But in the end, Arukenimon is tortured and killed by MaloMyotismon in the world of dreams as an excuse to test his new-found powers on her. 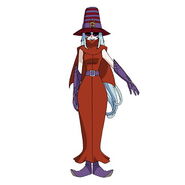