Hitotsu-Me Giants
"Facing yourself no matter how tough things get, and keeping up the fight, that's what games are really about!"

Anzu Mazaki or Téa Gardner (4Kids dub) is a close friend of Yugi Muto and a character from Kazuki Takahashi's manga and anime Yu-Gi-Oh! She is a duelist like her other friends however she is rarely seen dueling anyone she seems to be more of an escort. She is often by Yugi's side along with Katsuya Jonouchi, Hiroto Honda and Ryou Bakura as part of his regular group of friends. Though Anzu has only ever participated in a grand total of three high stakes duels she has in-fact won every one of them, though all were considered close calls.

Anzu was first introduced as she was saved by Yami Yugi while blindfolded and has since tried to uncover his true identity. Her search had brought her close to Yugi Muto and has since been trying to help him make sense of his millennium puzzle. Through-out the manga she deal with numerous delinquents at school and tries to help Yugi avoid the wrong sorts of students. Anzu has been taught about how to play the Duel Monsters game b Yugi, however she has less skill for it than he does and similar to her friend, Bakura, views it as little more than an amusing hobby at first. Over time Anzu comes to the conclusion that the duels Yugi and Jonouchi play are not just games, tests of skill or even mystically importance as much as they are vital tests of character based on the choices one can make and how quickly things can shift.

Anzu spends her spare time watching her friends practice Duel Monsters at Sugoroku Muto's hobby shop and has picked-up a little just from the experiences. Though at first Anzu's primary concern was to figure out the identity and nature of Yami Yugi she has long since become primarily focused on Yugi's safety instead. As the story progresses and Yugi's adventures take him to more far-out locations such as around the city, to private islands and even to Egypt, Anzu always make's sure to remain by Yugi's side to watch-out for him.

Like, Bakura, Anzu is often the voice of reason and councils her friends to approach a situation with great care so as not to put themselves in unnecessary danger. Anzu has had a crush on Yami Yugi but it appears to have some-what shifted to Yugi Muto instead. Despite her usual trepidation, Anzu will throw caution to the wind if one of her friends is in trouble, at which point she is all too glad to endorse a decisive course of action.

During season 3, Anzu and her friends are abducted by Noah Kaiba and taken into his virtual world. Deciding to separate them all, Noah decides to send Anzu to a desert with large canyon filled with large rock formations. Awaking inside the canyon, she finds herself alone and her friends missing, as she ponders where she is and what has happened to her friends. Noah takes a moment to spy on her using his virtual screen projections from his command chair. He decides to make things interesting for Anzu and thus creates four cyclops like beasts armed with stone aged weapons and wearing animal skins for clothing.

Anzu spends sometime wandering through the canyon, hoping to find someone, unaware that the cyclopes are hiding behind the rocks of the canyon stalking her as their prey. Soon after, Anzu is alerted to their presence after hearing rocks falling from a nearby cliff. Looking up, it is then that she sees one of the beasts before he disappears behind the rocks. Anzu then quickly finds herself surrounded by the four monsters as they linger on the cliffs and behind the rocks. Though frightened, she attempts to make a quiet escape by walking back very slowly. Her attempt is blundered however, when the back bottom-tip of her platform sandal kicks up a loose pebble on the ground. The noise alerts the cyclopes to her attempt to flee causing them to roar in fury and begin their assault. The first one she saw, who is also the pack’s leader, is the first to attack. He jumps from a nearby cliff ferociously throws his axe at Anzu with lethal intent. Though her life spared when the spinning axe lands a distance behind her, its impact shoots up dozens of sharp rocks into the air. One of them ends up hitting Anzu right under her left eye, inflicting a small but painful gash. She has no time to recover as the giants continue their assault, forcing her to flee from her cyclops pursuers. Terrified for her life, Anzu desperately calls out to Yugi (revealing her feelings for him) to save her as the beasts come ever closer to catching her. Anzu unknowingly falls into their trap however. The three cyclopes after Anzu were merely chasing her towards the fourth member of their pack, who was hiding behind some of the rocks after they launched their attack. Lying in wait, the cyclops patiently waited for Anzu to be led to his position. When she gets in close encourage, the giant reveals itself to her, cutting off her escape as he looms over her. With no where left to run and a look of horror on her face, Anzu is left frozen in fear as the cyclops raises its claws high into the air and swats her to the ground.

Though the beast’s attack does not kill her, Anzu is left unconscious as she lies on the desert floor. Instead of finishing her off, the leader of the pack (responsible for her gash) instead picks her unconscious body off the ground and throws her over his right shoulder, carrying her as a prize. With the lovely girl turned from prey to captive, the leader marches off with his prize through the canyon with his tribe-mates following close behind. Sometime after they begin carrying her off, Noah checks in on their progress through his virtual screen projections. The screen shows Anzu as the insensate young woman lies draped from the leader’s shoulder, her beautiful thick brown hair falling all the way upside and revealing the full of her lovely face. Noah briefly watches her abduction, laughing with sinister glee as she is carried off deeper and deeper into the gorge. Sometime later, the cyclopses finally make it to their destination; an underground cavern beneath the top of a large hill. The leader carrying Anzu places her atop of a large stone structure in the center of the cavern. Bringer her there, he unsymmetrically dumps her off his shoulder down onto the surface of shelf which is made of pure hard stone. Landing on its stone surface causes the unconscious Anzu to scream in pain as her body squirms. Watching her in pain visibly amuses the cyclopses, as they stand over her with glowing red eyes.

Anzu’s hair upside-down (right) and right side up (left)

An unconscious Anzu being carried over the shoulder of a cyclops beast.

Anzu with her favorite bag. 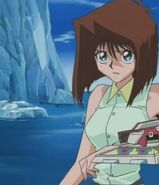 Add a photo to this gallery
Retrieved from "https://characters.fandom.com/wiki/Anzu_Mazaki?oldid=159079"
Community content is available under CC-BY-SA unless otherwise noted.